I could say " I left Nice with a heavy heart" and I wouldn't lie but the fact that there were so many wonderful places waiting for me around the French Alps reduced dramatically the sadness from the loss of a city that sits proud and high on my "places I'd reside in a heartbeat" list. Stephan, my host's friend, was willing to wake early and meet me for the keys since Catherine would still be away. Apart from the heat and traffic I also wanted to avoid afternoon's rain so I told the poor guy to come at 8 am though he offered to come even earlier. I didn't have the nerve to steal even more time from his summer sleep. So wonderful people...

I ride eager to cross all these beauties hoping to arrive dry. Lovely weather in the morning before sun heats up the lowland and not much later I find myself inside the Mercantour park where I stop bothering myself about the heat since the rest of my route will be spent in altitudes of thousands of meters above sea level. Driving by the Tinee river and previously on Bar, the road reminds me a lot a route I followed 9 years ago on my way to Aix en Provance after Gorge du Verdon. Same bike, same rider, different hopes but let's stick to the subject...

Altitude goes up, temperature goes down, I'm on the limit of  stopping to put on more clothes but I say to myself wait till I reach the top and there's nothing colder after that. Why? Because I reach Col de la Bonnette at 2800 m. For the second time after 9 years. Emotional? Very. Cold? A lot, especially the wind chill since I left Nice with max of 30s and I reached single digit temperatures in only a few hours. First time I reached this pass it was late June and there was still lots of snow. Now (August) it was almost gone unveiling the wild beauty of naked rocks. Naked but full of pleasure for the nose coming from these amazing herbs who manage to survive in such extreme conditions. Astonished and covered in French perfume I take some pictures from the highest point I've ever been as a driver: 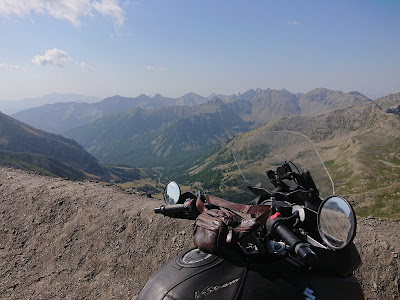 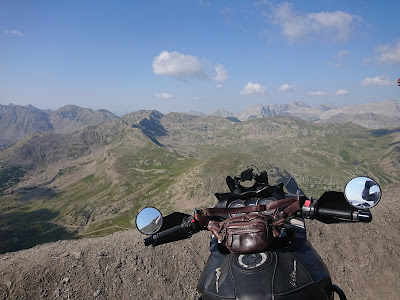 During my first time there 9 years ago I can't recall professional photographers around but now they are almost on every famous French pass. Here's your's truly, pictured by Declic Photo, unexpectedly on the go: 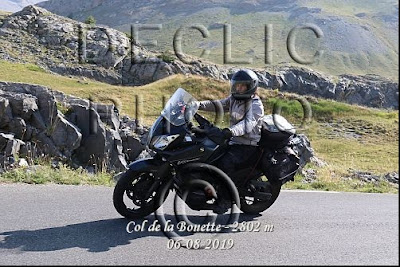 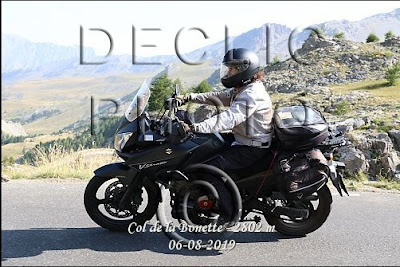 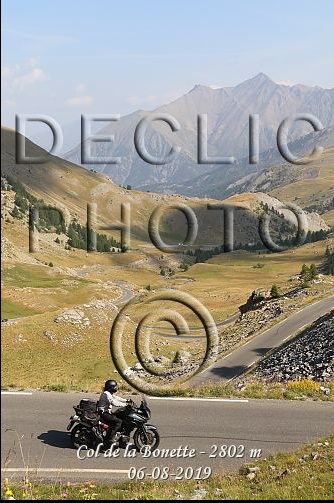 This last one has enough Looky Look - lone rider - feeling to be the cover of the book I may never write, even though the last girl who shared my bed insisted to do so (and write one). Was she gifted with literature instinct except high sexual intelligence? Fortunately I only explored the latter, she was enough care taker to spare me from the rest.

Going down the mountain, going up on the map and the next km is a blend of emotions for partially doing the same road again after years (up to Briancon) and exceptional Alpine beauty with lots of passes above 2000m.

A cyclist pictures me at Col de Vars: 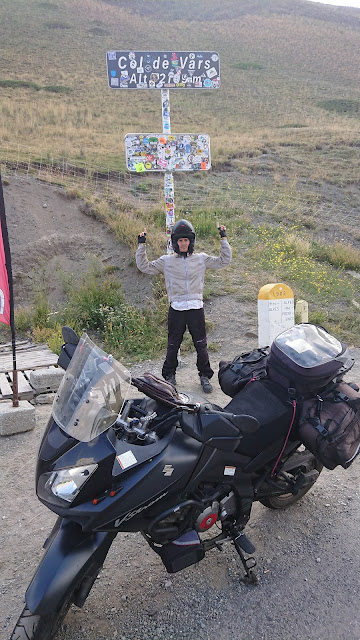 So does Col Photos at Col de Galibier, 2642m 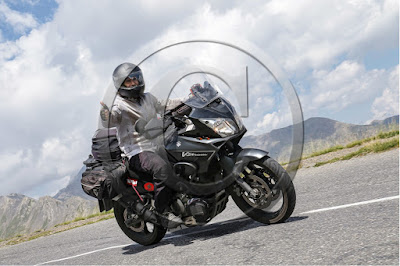 Fancy some 9 years challenge on (almost) the same spot? 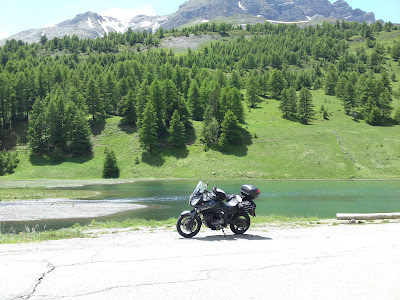 Fortunately the weather showed mercy and I managed to cross the (very scenic as you imagine) Ecrins national park without drama though clouds started gathering as a threat. After all these and 6 (if I don't forget any) Alpine passes all above 2000m and some 300km I manage to arrive at my destination, the village of Valmeinier, above 1500m. The owner of the studio I have rented waits for me and being a French pensioner it's no surprise he speaks absolutely no English. With a bit of mutual effort and body language we manage to convince each other we communicated on the basics and I start unpacking. Indoor temperature? 17C! First time ever I had to use a heater in August. I fill the bath tub with hot water and take a dip to relax.

Watch the video from the route of that day and see you on the next part: