Even when you know more or less when you're gonna come back home after your trip, if you don't book your return ticket then it tastes better. I decided to do so on this trip which though it is a bike trip it requires a ferry to get to Italy straight from Greece, in my case from Patra to Ancona. I had no strict plans about the route itself. Just a general idea of tripping around the beautiful mountains of central Italy then head for Torino to meet some friends and later on cross South France to go as west as my zero sponsoring allows me to do. My basic motivation comes from the JUST DO IT!! spirit as I described in that previous article of mine. In a funny mood I named this trip “REHUMANIZE THE P.I.G.S.” making a joke on the financial pigs of South Europe that I was about to visit on my way.
I started on 15/6 from Athens to Patra on such a hot day that riding a bike felt like having tens of hairdriers aiming at me. I ride wearing only my summer jacket on top without any t-shirt inside but still I suffer. I chose to take the non toll old road to Patra since I was in no hurry and excluding some spots with lots of traffic it wasn't a bad idea. Part of this route is quite nice with a lot of attractive beaches on the way but if you're not familiar with the area you may loose your way as there are not enough signs around. If you drive a car just DON'T do so. Take the toll road otherwise this narrow one I took combined with heavy traffic will soon make you regret it.
The Adriatic sea was again calm as a pool like one year ago when I was going to Venice at that time and this resulted in a very relaxing and comfortable trip. 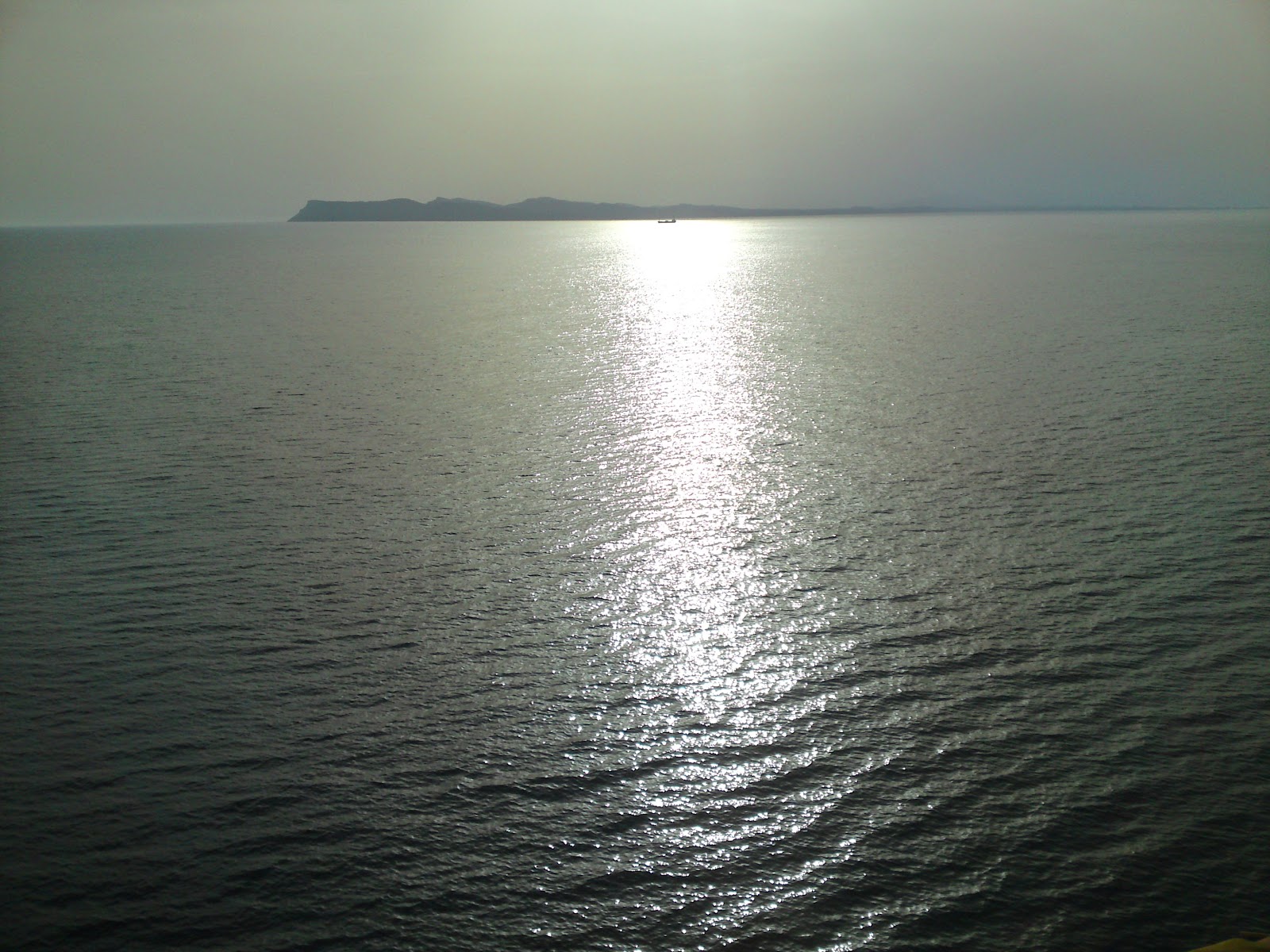 The arrival at Ancona though was not relaxing and comfortable at all. The Superfast ferry had a delay of one hour and it took us another one hour to escape from the ferry's garage while some guys had the great idea to move my bike in the garage during the trip without informing me at all and I went pale till I managed to find it later hidden behind some trucks. Totally unacceptable and disrespectful behavior.
Weather at Ancona was perfect. First kilometers on the way to Pesaro were not that impressive – just some pleasant parts with low in general traffic. Heading for San Marino the route became much more interesting. Small and beautiful, this state won't make you regret if you decide to cross it but don't change your route too much only for this reason.
Heading on Northwest the route is beautiful in general but the really fantastic part lies between Predappio and Rocca San Casciano. Tight curves in full green mountain on a road covered by trees. Let's mention that Predappio is the birthplace of Mousolini and fortunately the events on his memorial are fading away year after year. In the past when his fans were younger and more active, they used to have a guard on his grave for all 24 hours of that day.
I stayed outside Rocca San Casciano, at the very hospitable Agrotouristic business of the Mini family ( www.lumachetto.it ) which I totally suggest if you come around this area. Great place for hiking as well. 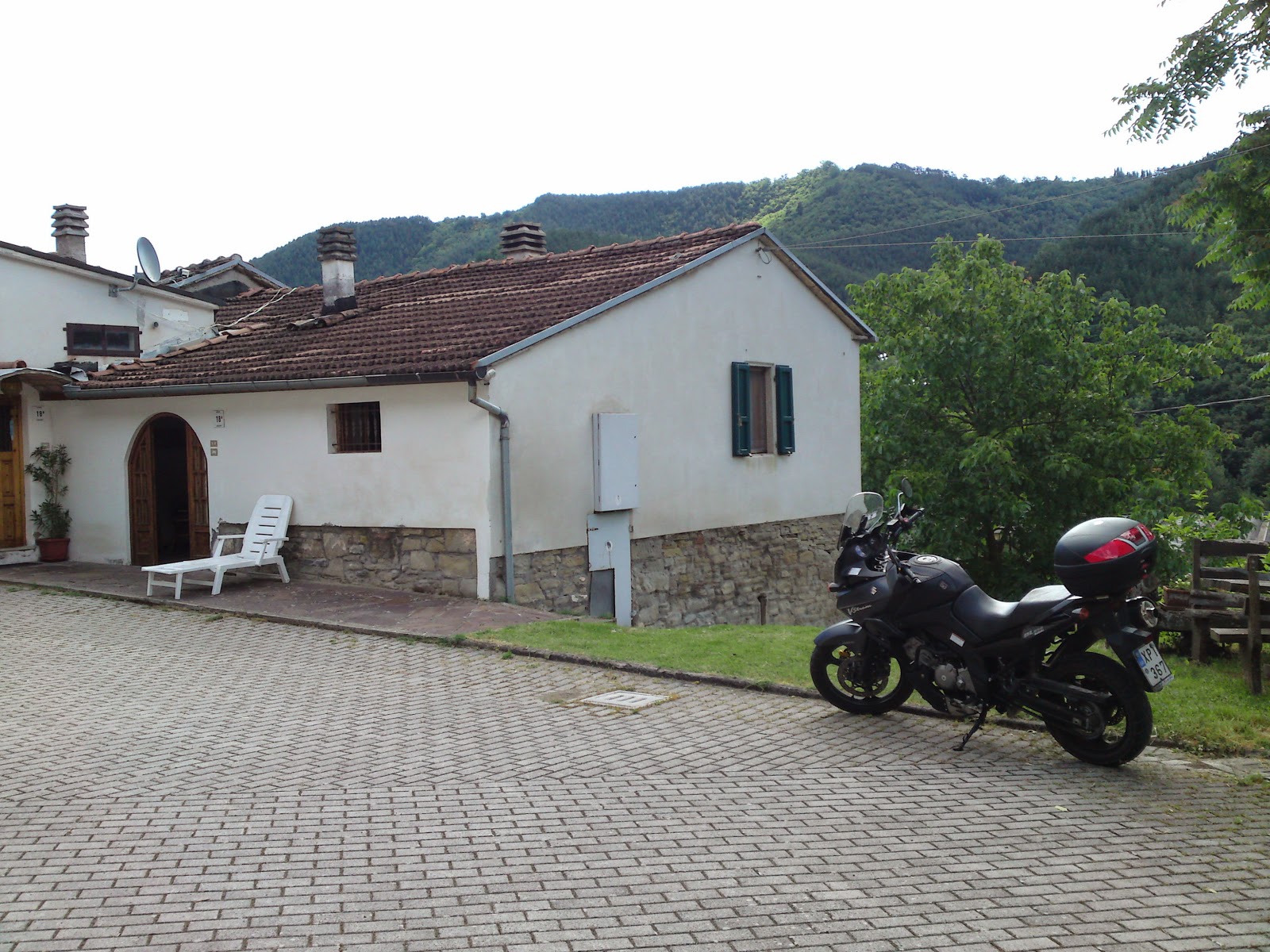 Next day I decided to visit Florence and I have no regrets about it as all 80kms of SS67 offer emotions crossing gorgeous forests passing through Passo del Muraglione at 907 meters. 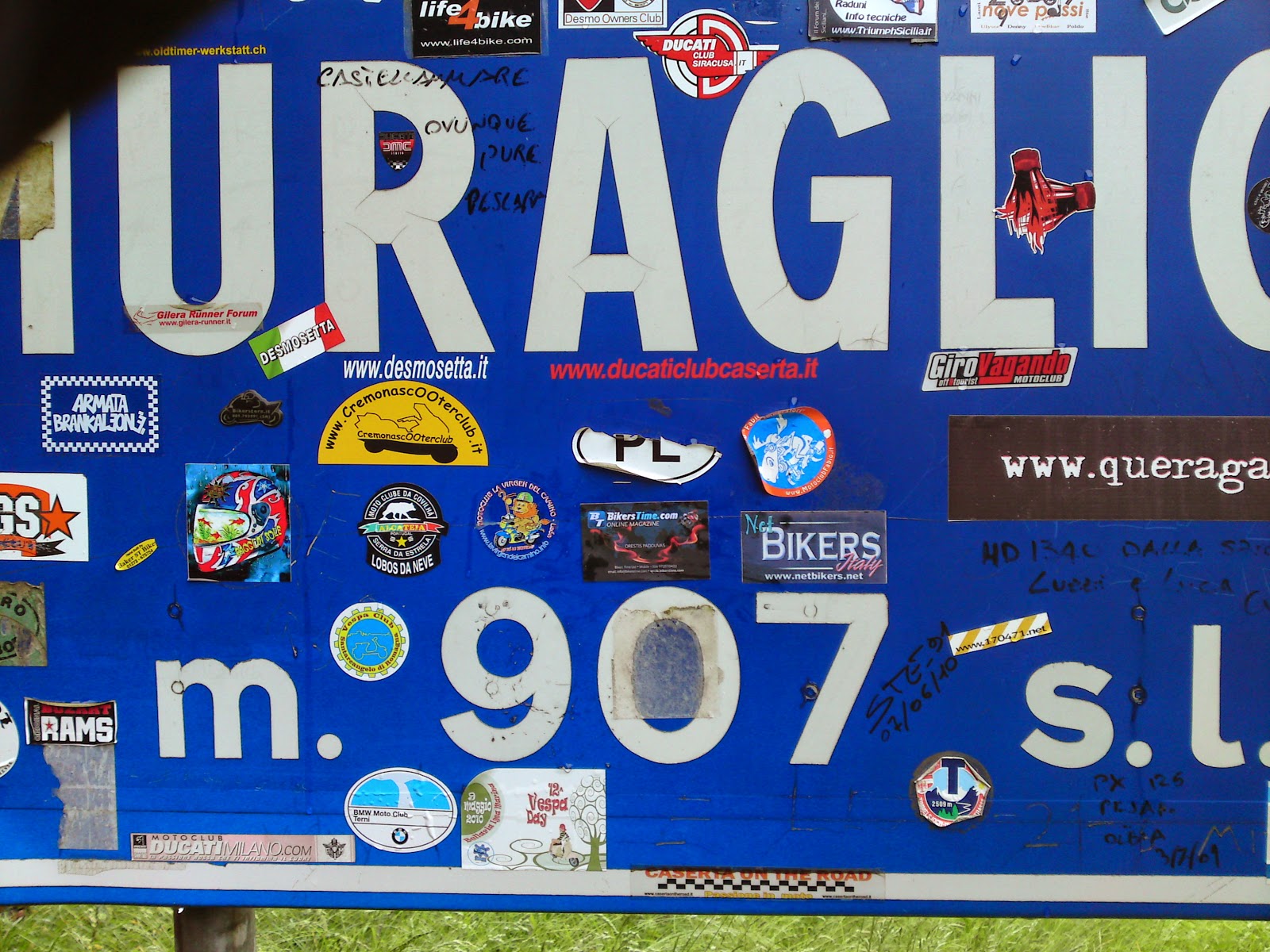 Florence as you may already know is really beautiful. 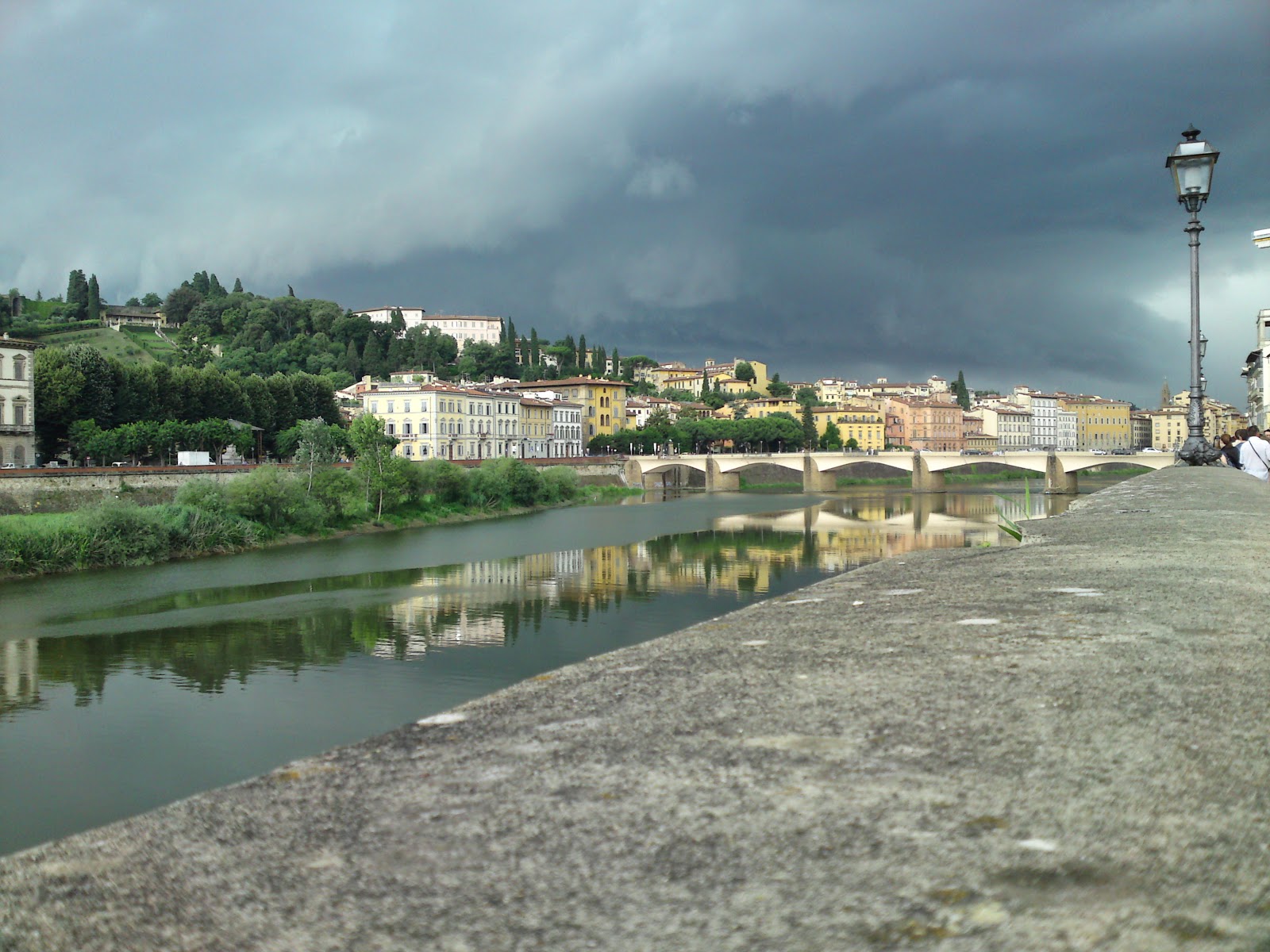 By the time I entered the city weather decided to rain in one day as much as an annual precipitation with hail included. You can guess I didn't have the chance to enjoy Firence. This could be my penalty for the joy I had on my way to the city so these conditions followed me during all my way back to Rocca San Casciano.
Fortunately next day was much more pleasant than last afternoon so I continued my trip in great conditions. Heading Northeast this time the SP21 is a nice mountainous road as well as SP81. Via SS9 I reach the area outside Parma without any special experiences. The same goes for the first kilometers on SS62 heading south for Tuscany. After Rocci though, the road is going up the mountain and is really a joy. Endless cornering, great view, no traffic. What else can you ask for? Passo dela Cisa is a nice spot to stop for a rest. 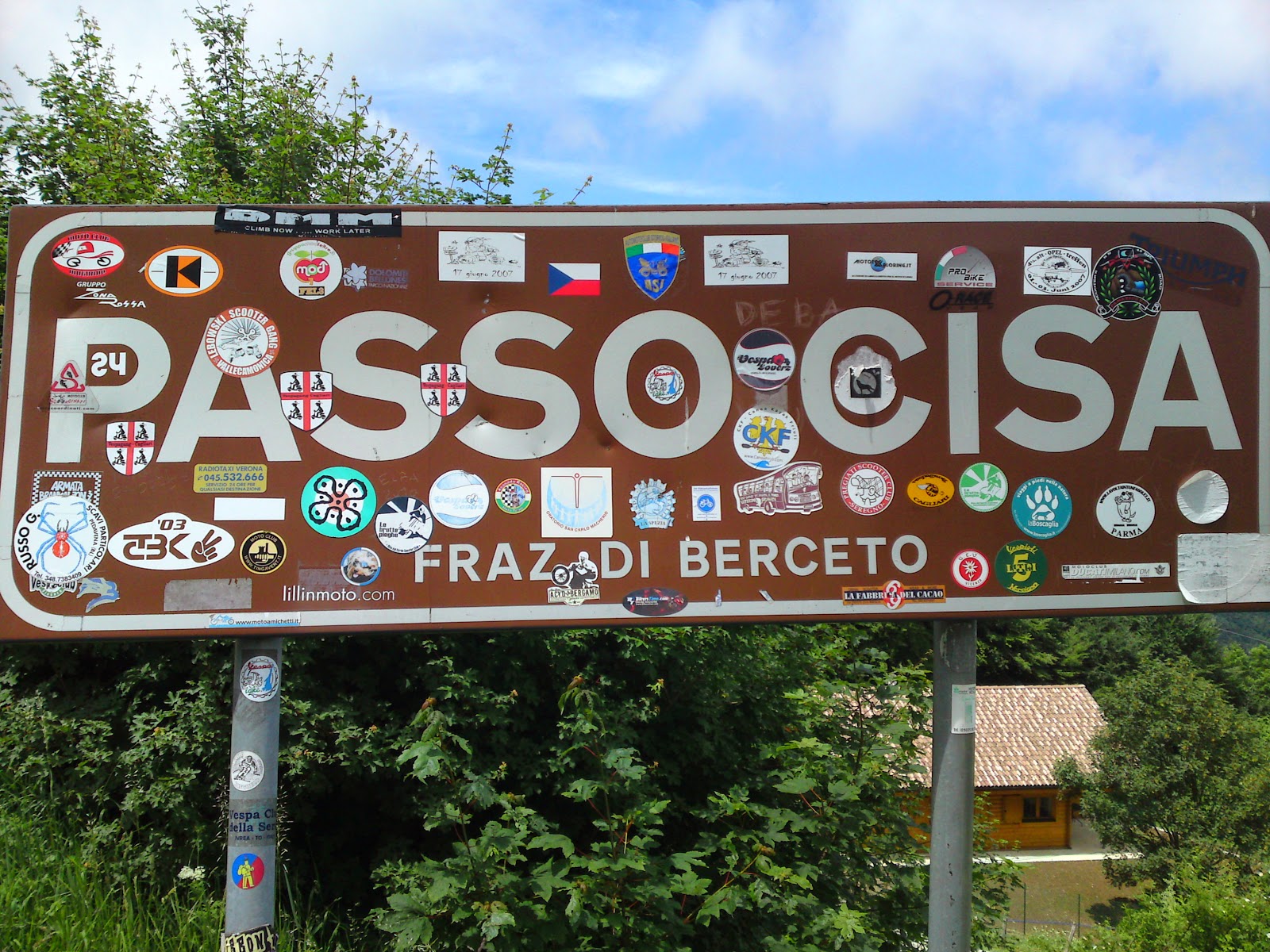 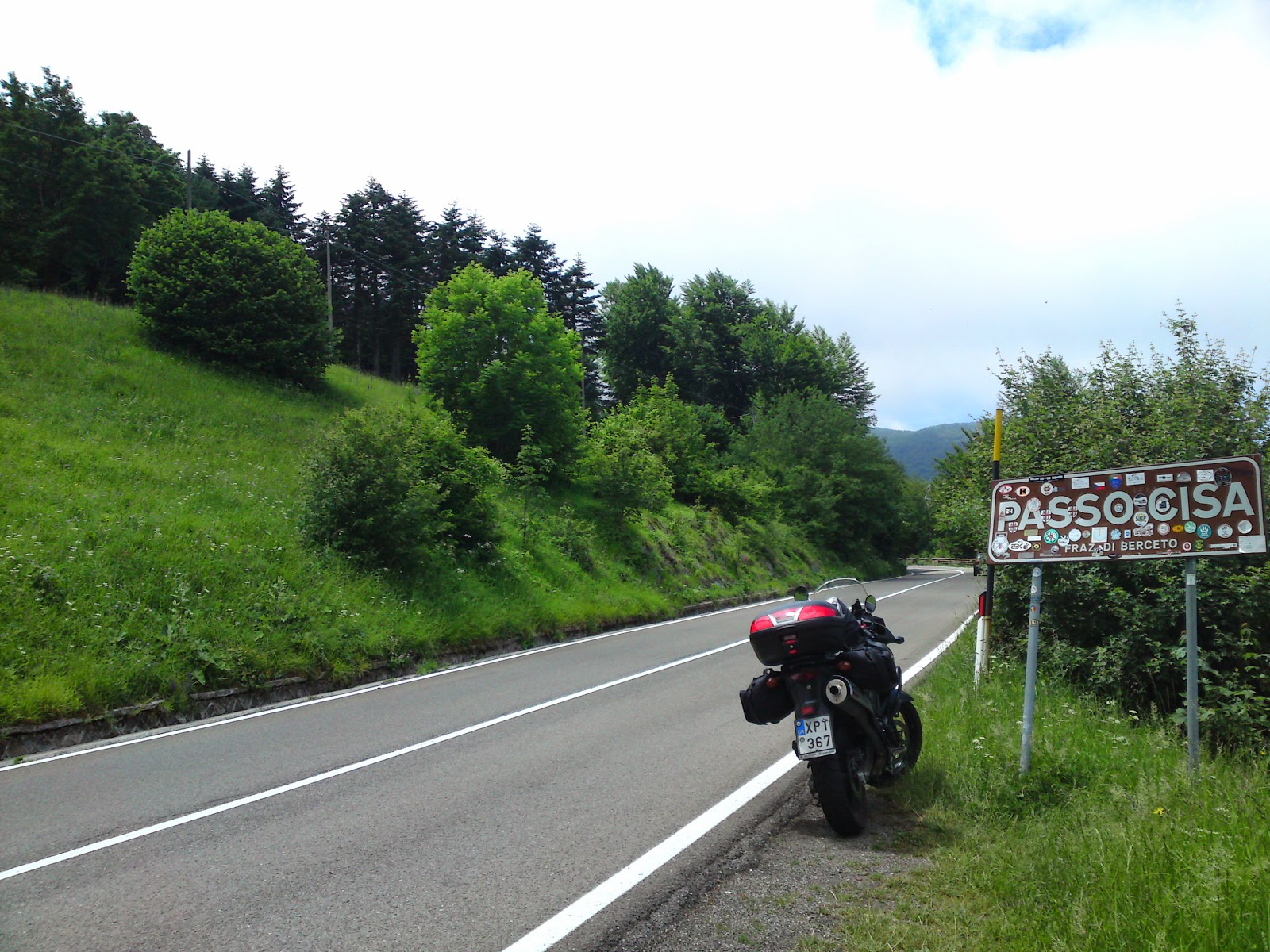 I ended up at Pontremoli as it started to rain again. The name of the city probably comes from the earthquakes that often occur there and make the bridges shake (Pon-tremo-li). Nice little one with scenic narrow backstreets. 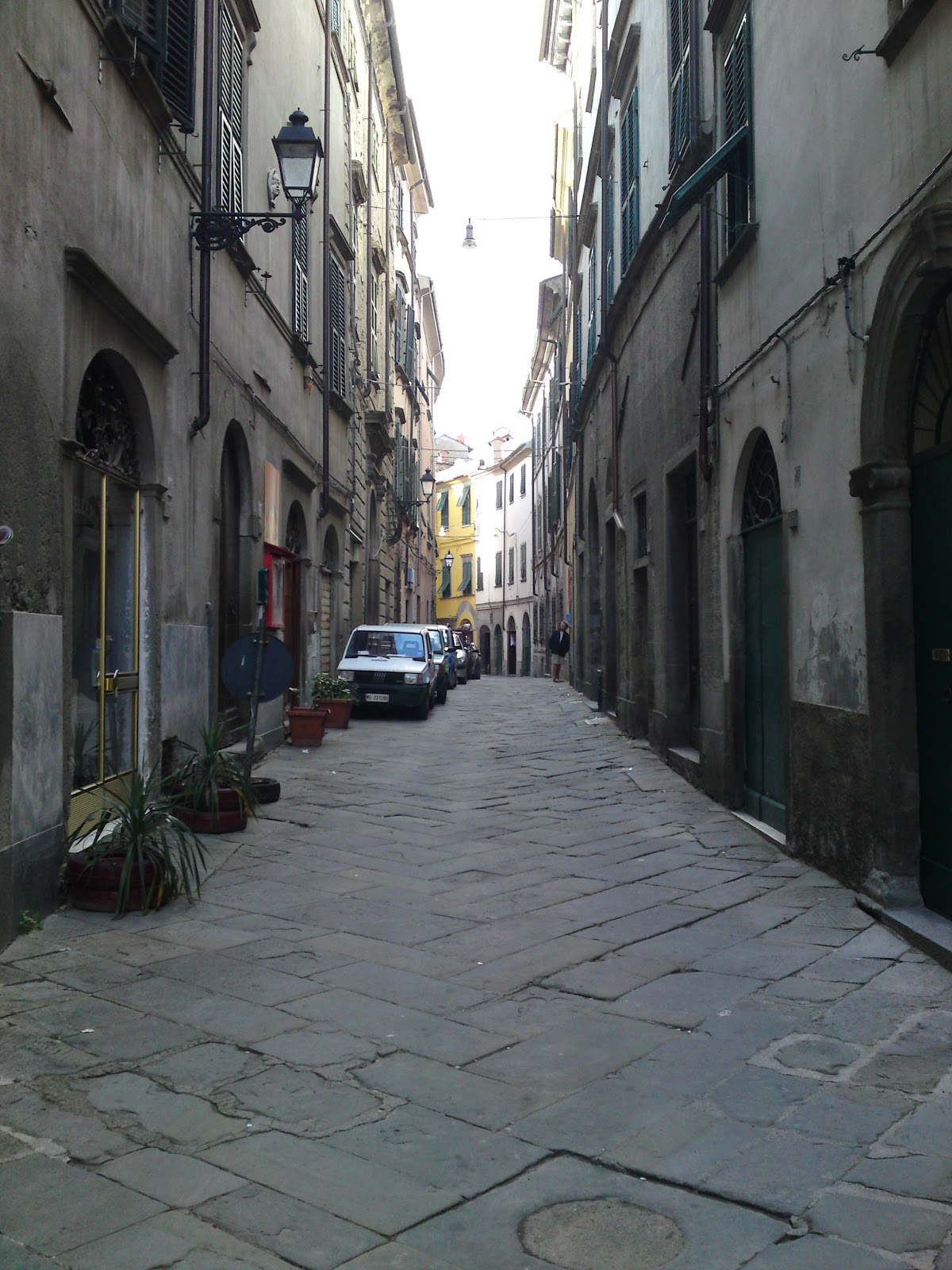 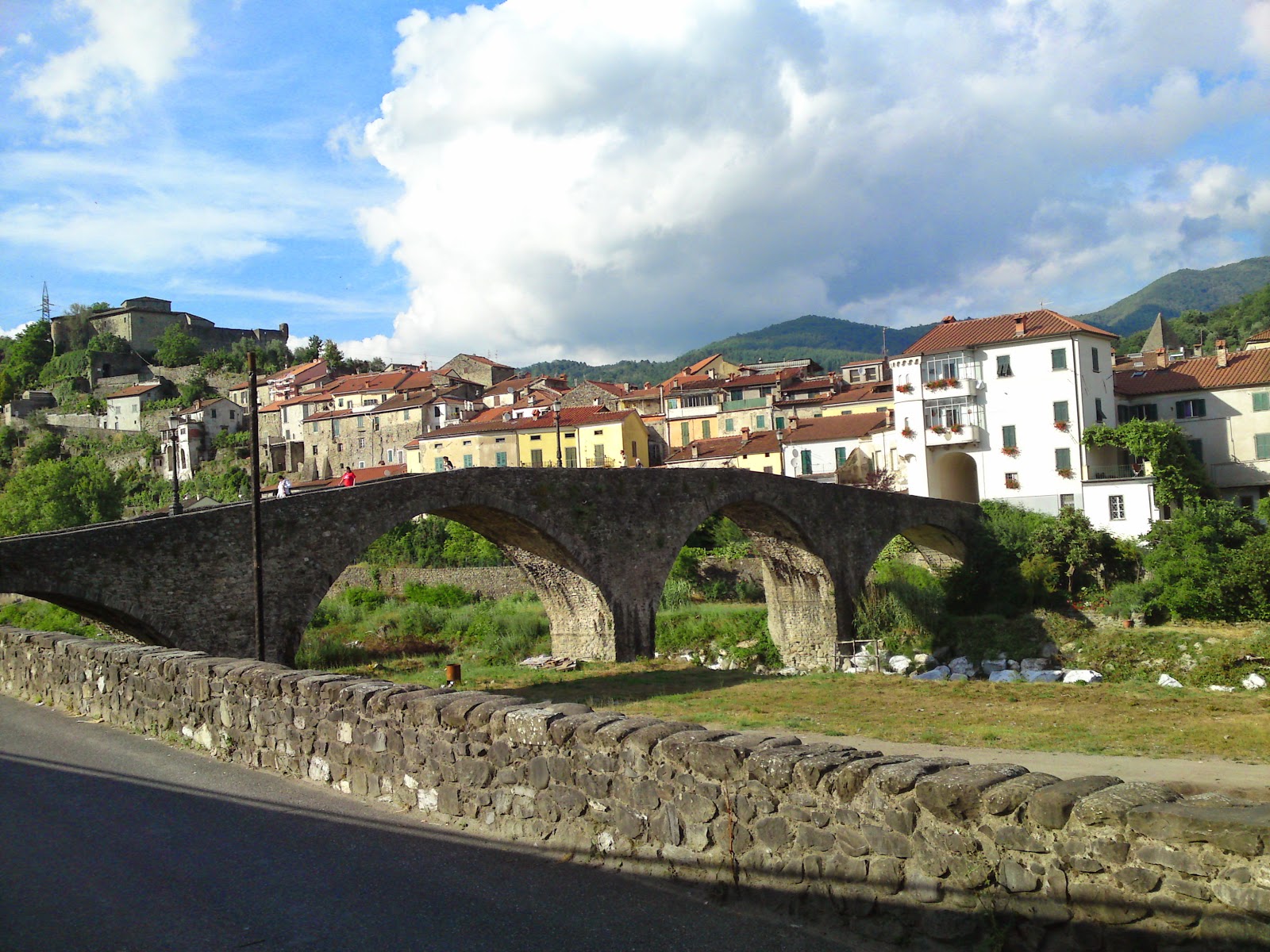 At the B 'n B where I decide to stay I was welcomed by a nice couple, Geoff Chamberlain (relative of the famous ex Prime Minister of England) and Serena (Armenian - Italian born in Libia). I had a very interesting chat with Geoff while he showed me around Pontremoli and both of them were kind enough to invite me for dinner to try Serena's cook. I won't forget the surprise they offered me as they proposed me to follow them outside at night, they closed all lights of the building and...countless fireflies took over the lighting! The combination of this view with the sound of River Marga was really a unique experience that can only be found in fairytales. Some scenes can't be captured by a camera – you have to experience them.
Next day's destination was Torino. Rainy and unpredictable weather. Heading back North to Passo della Cisa I drive for a while inside a cloud with limited visibility due to rain and fog. Weather on the other side of the mountain was better but not for long and the rest part of my trip to Torino was terrible driving for hours under heavy rain. Not that much of joy as it felt like  I was chased by a storm for the second half of my route.
At Torino I was hosted by Antonello and Deborah.  Amazing couple, super hospitable, they both admited that I was unlucky as this was the worst June they can remember. However, the fact is that in a beautiful city like Torino, with a good company like theirs, and nice food (don't forget I am still in Italy) you can easily forget any bad weather conditions. 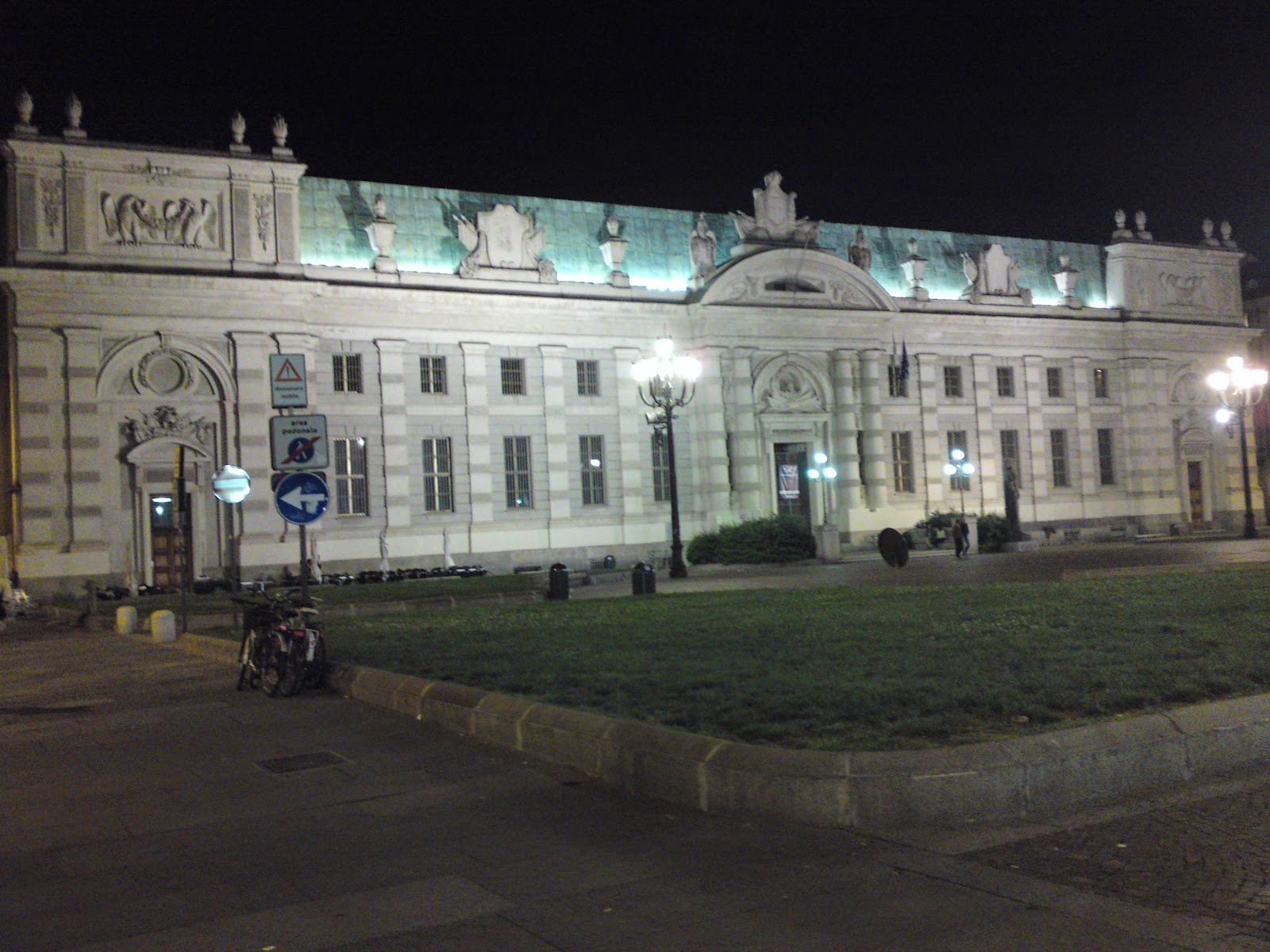 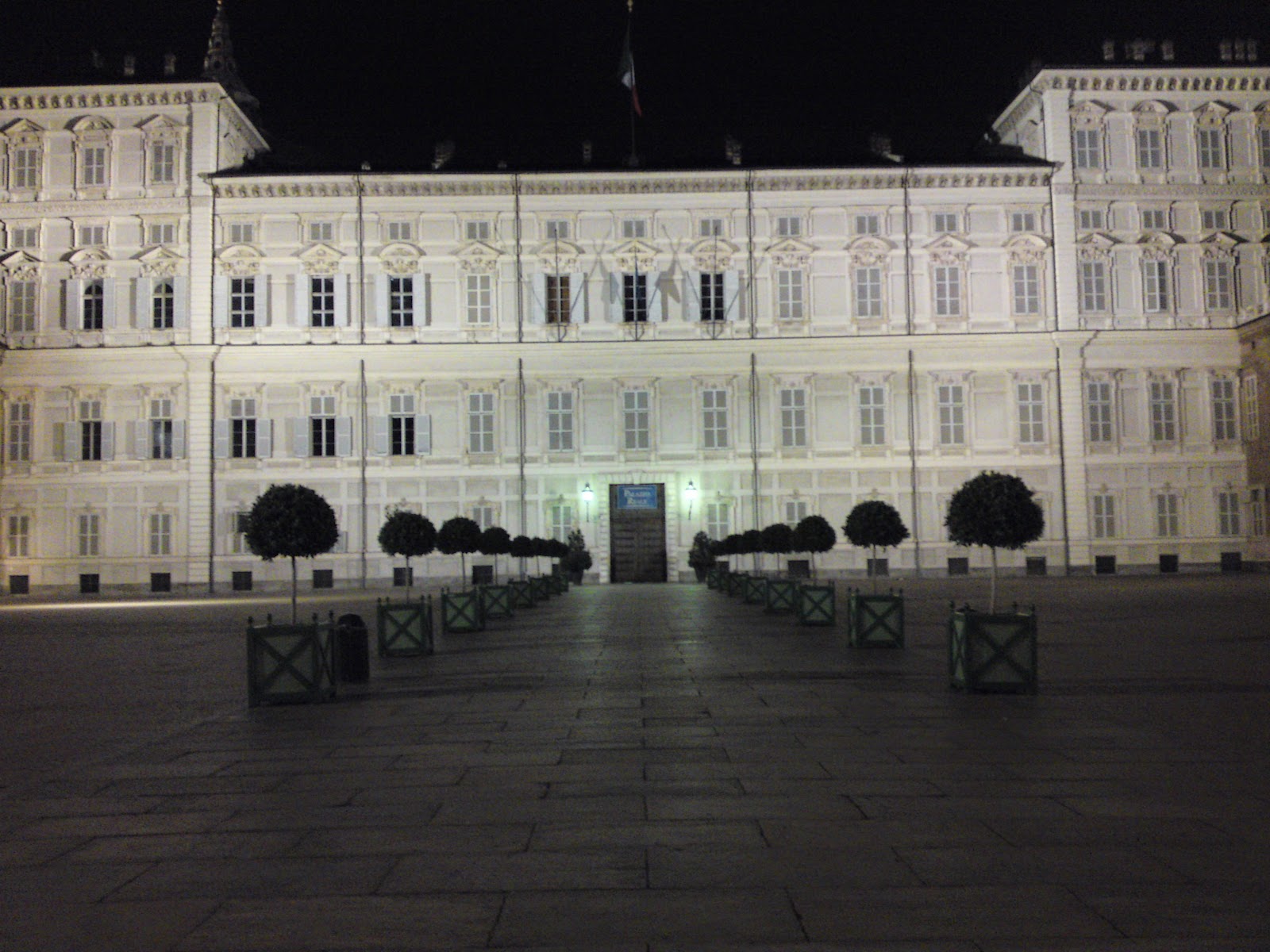 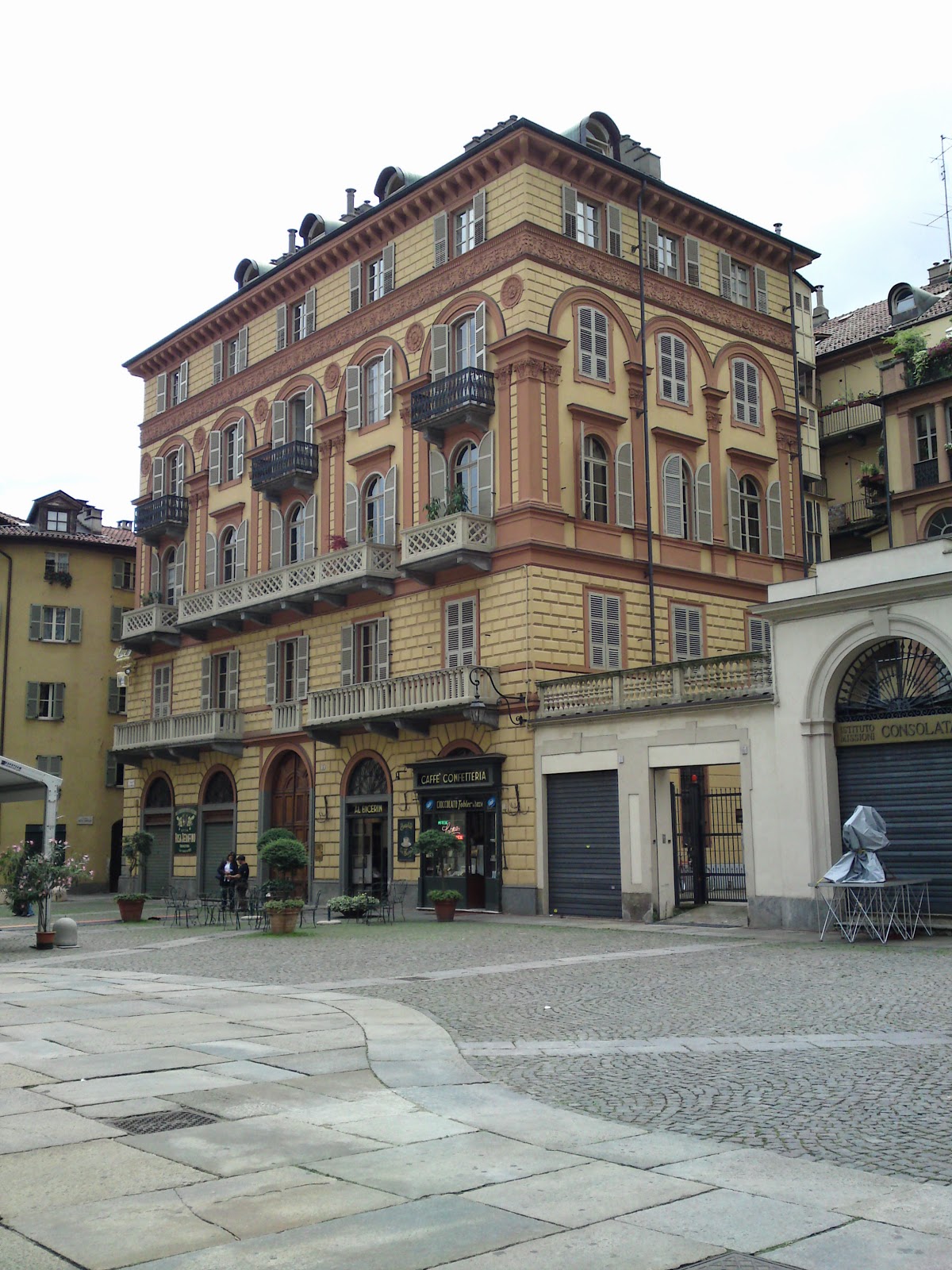 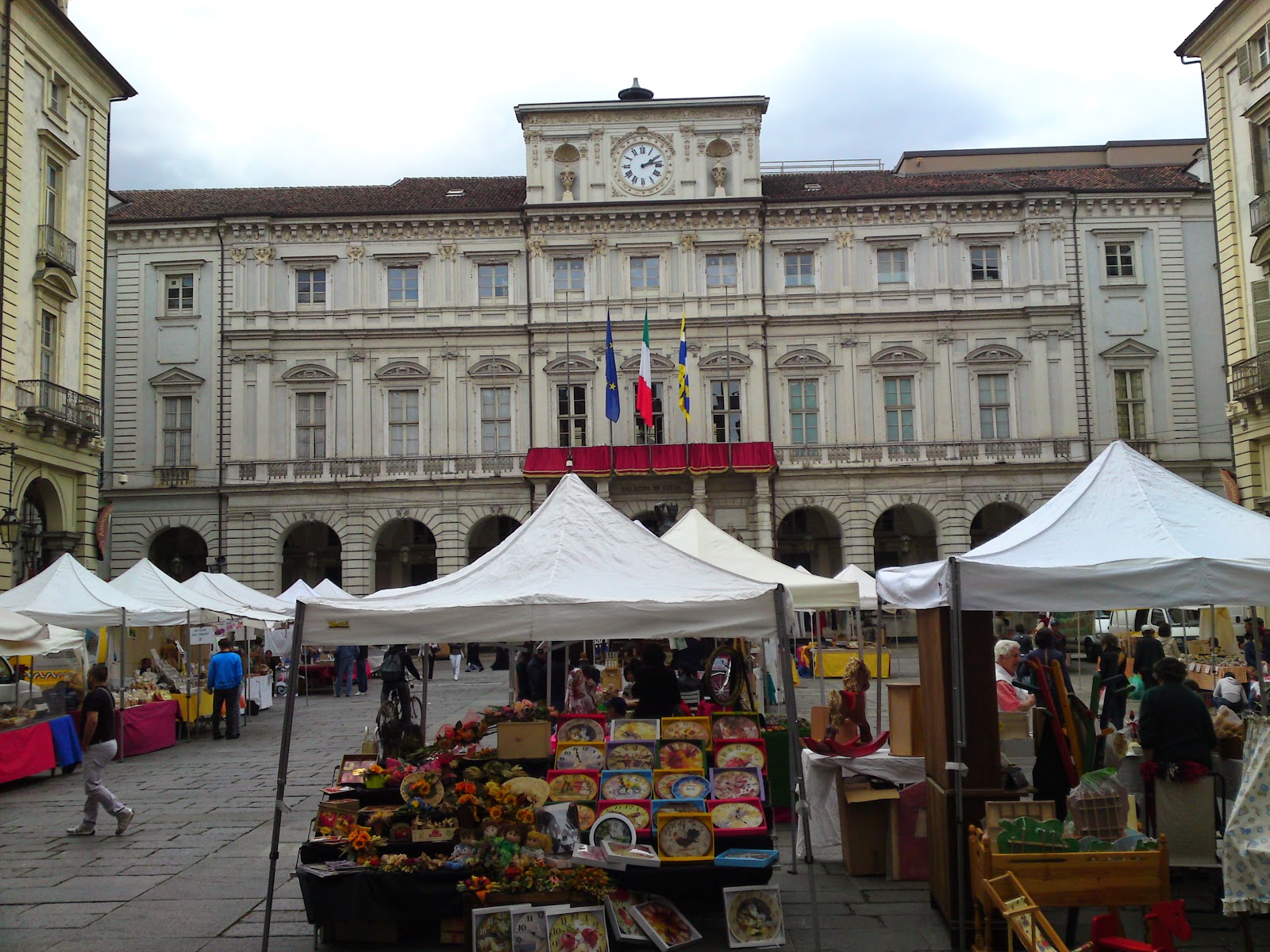 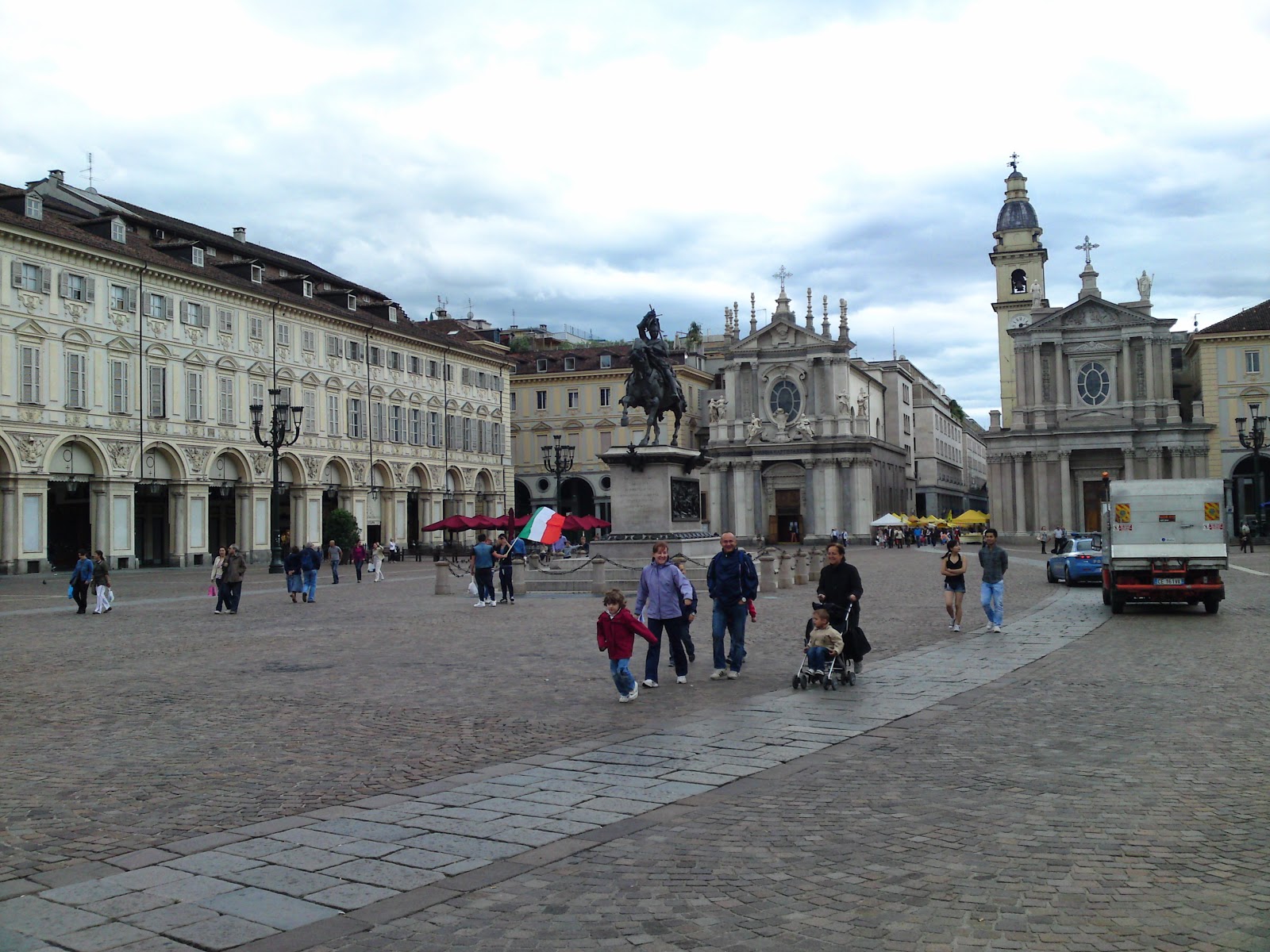 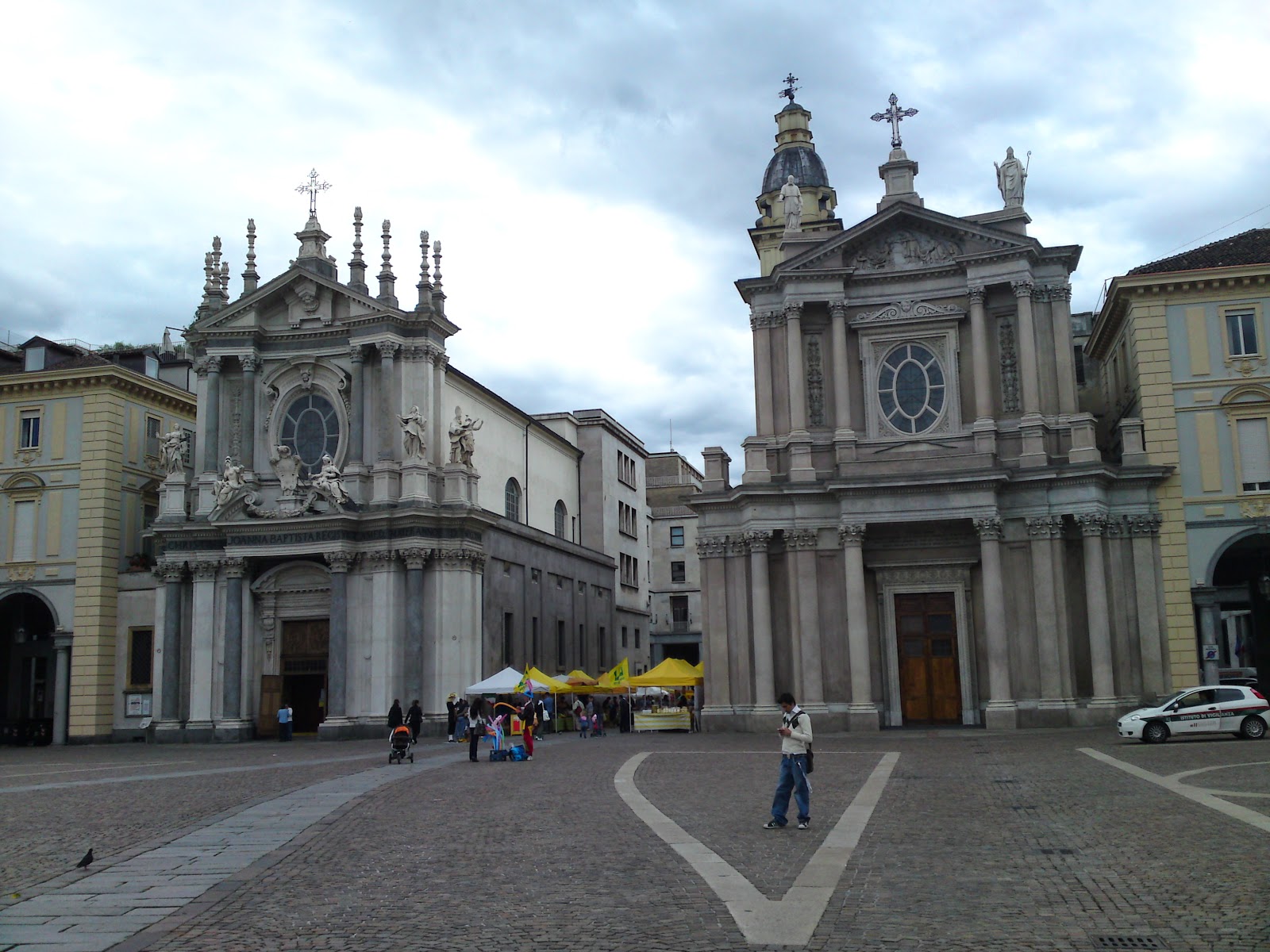 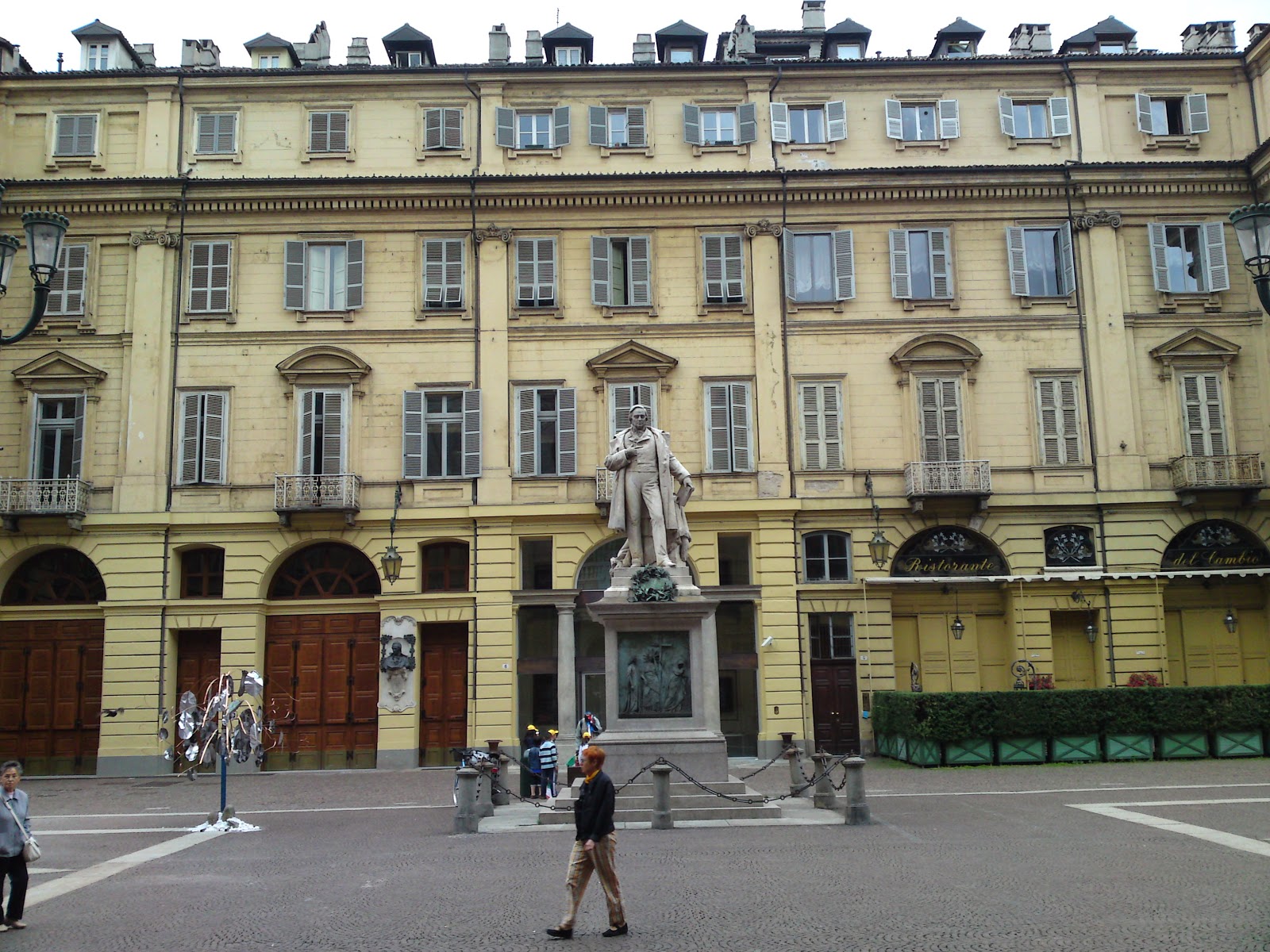 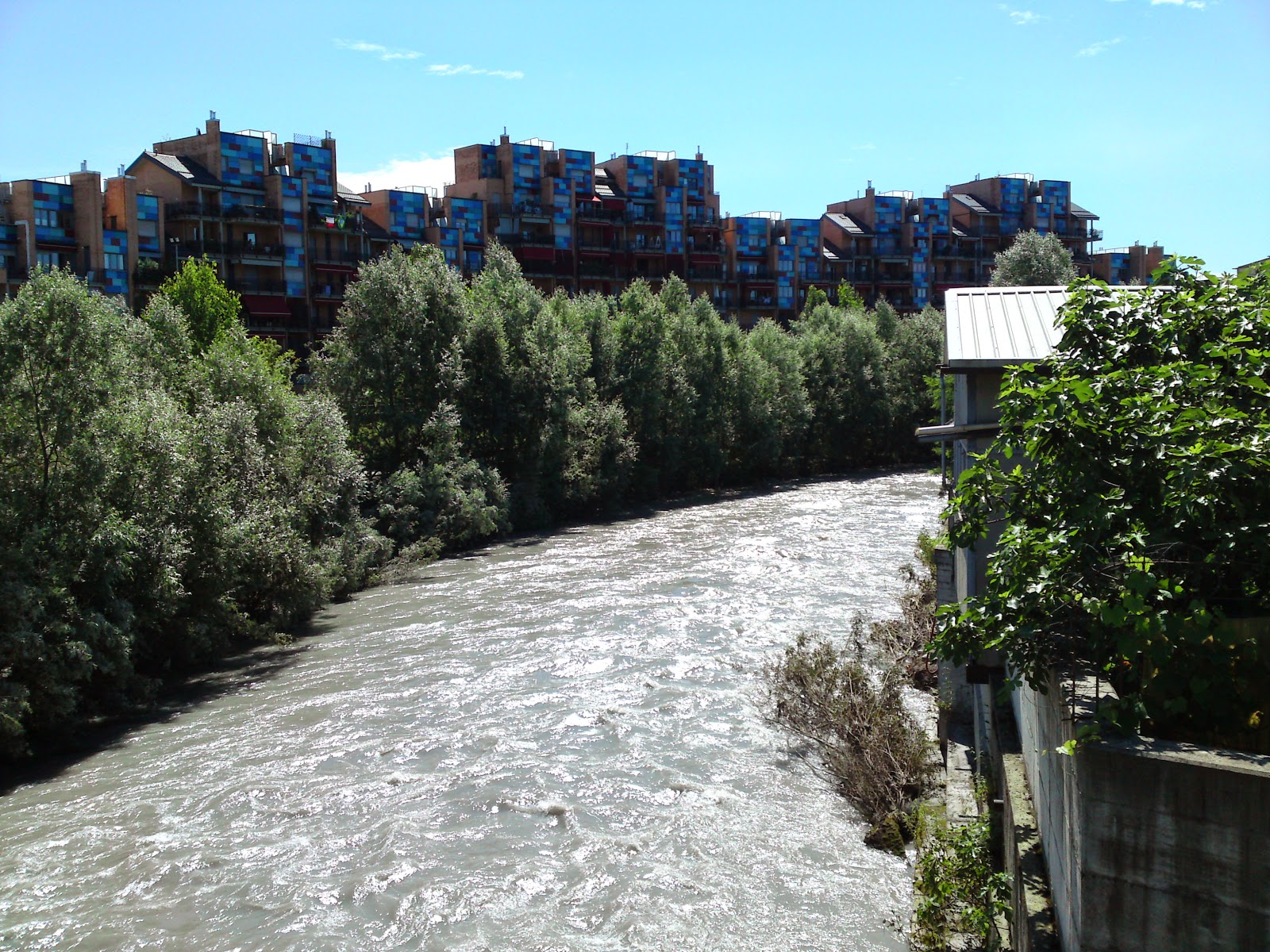 The bad luck's parenthesis continued as my bike fell of the stand and I got a broken shift lever and a bended clutch lever. Murfy's law, all these happened on Sunday and in Italy dealers are close on Monday as well. Antonello's inventiveness (by the way he is a mechanical engineer) with a good help from his friend Julio fixed the whole thing. Both great guys, they turned a setback to a pleasant procedure of a few minutes at Julio's lab. 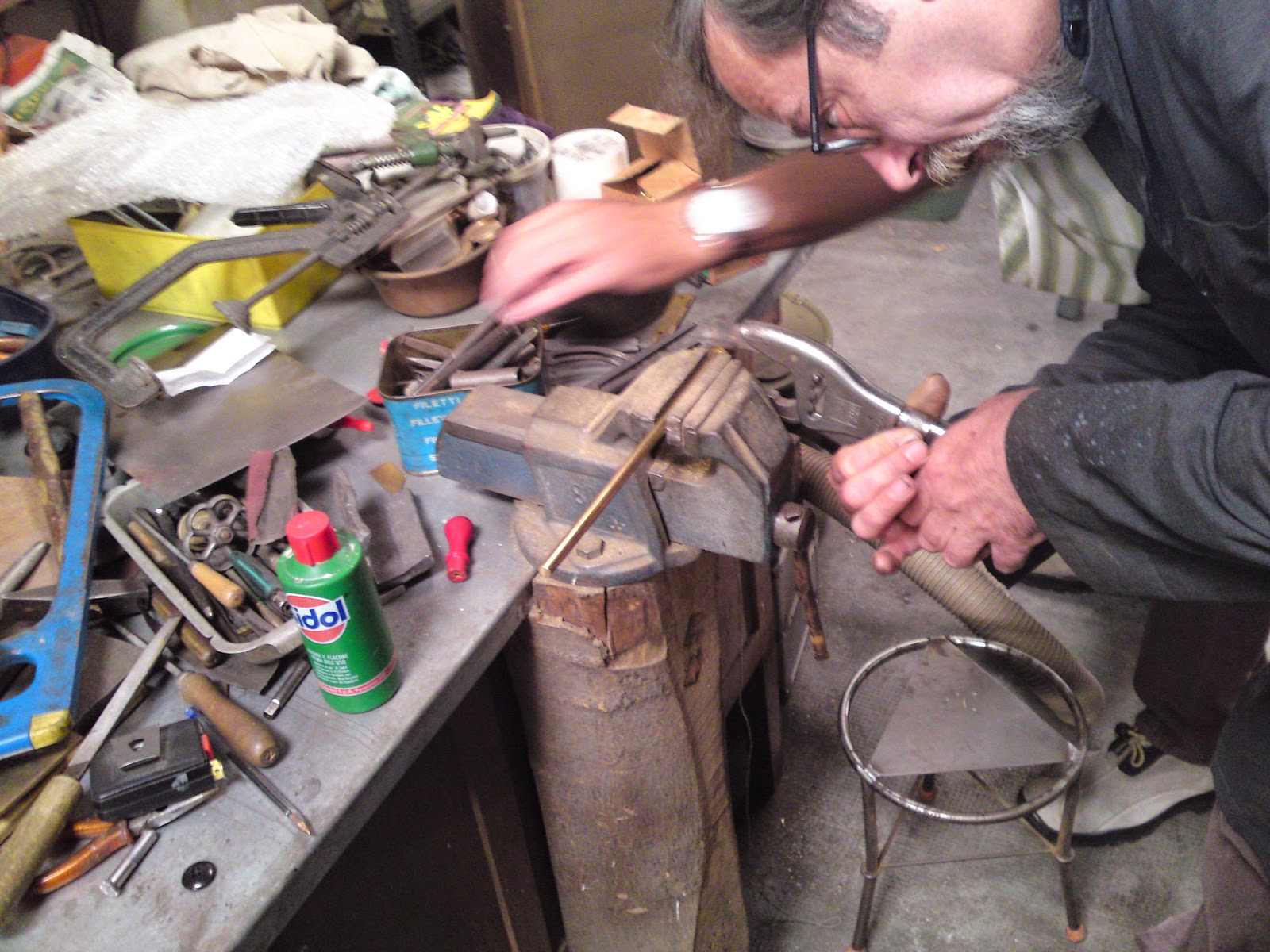 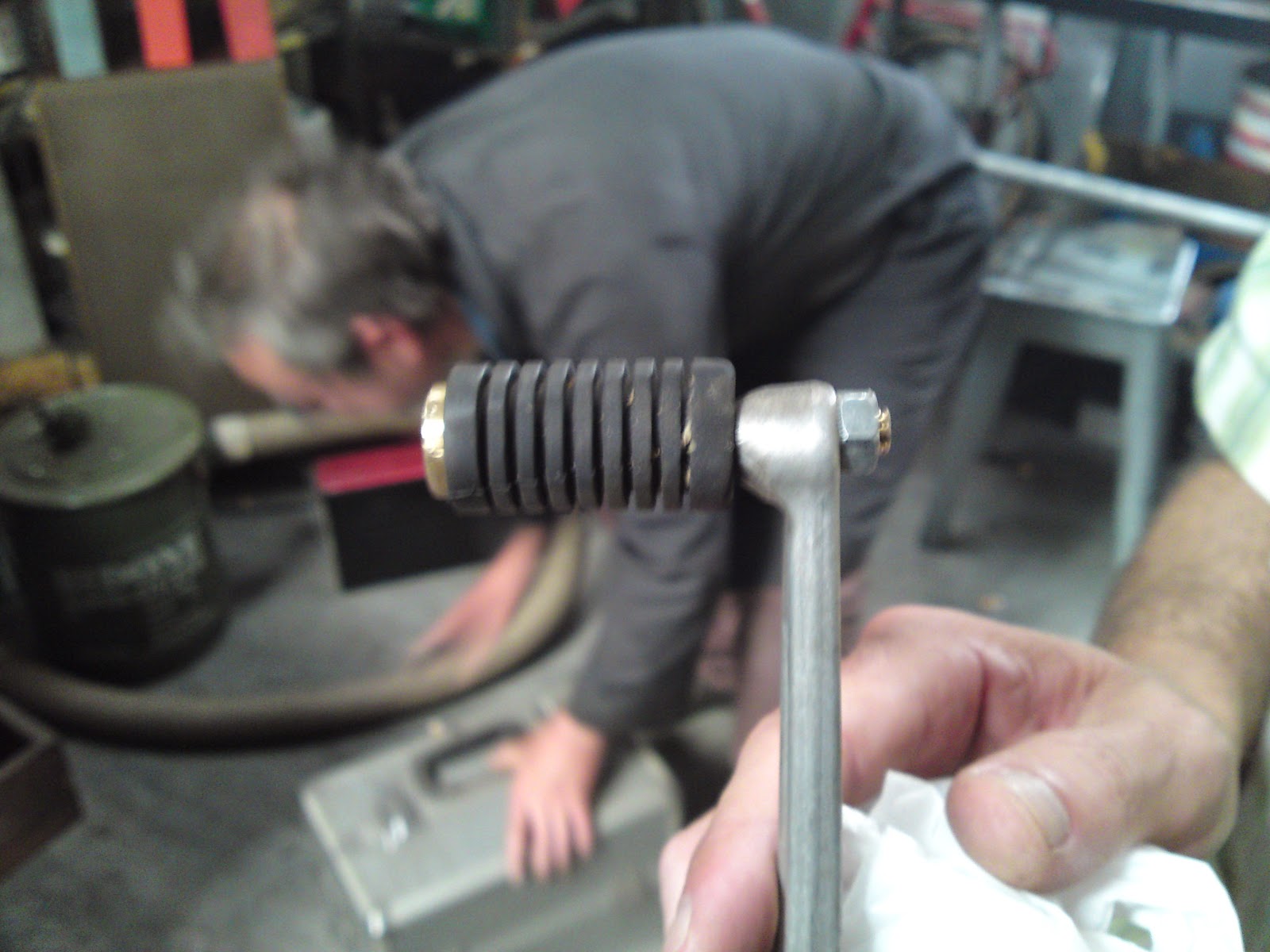 The test ride included a route to to Lake Malciaussia Northwest of Torino. This route is what you can call “Biker's Heaven”.    Endless curves, including super tight switchbacks, in a very beautiful forest lead you up in the mountain where there's still snow at its picks. At 1800 meters altitude lies the lake where the view is unimaginable. 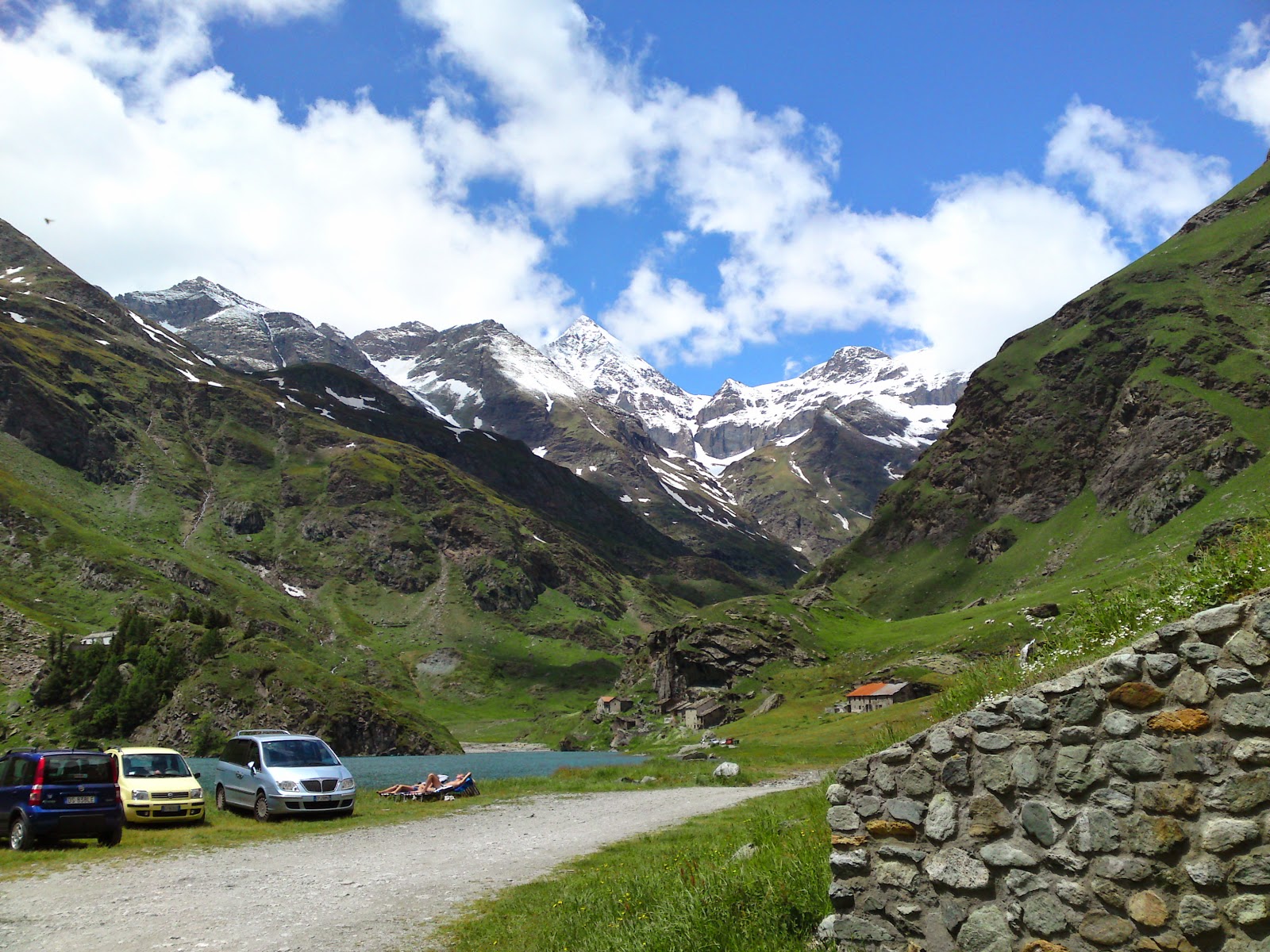 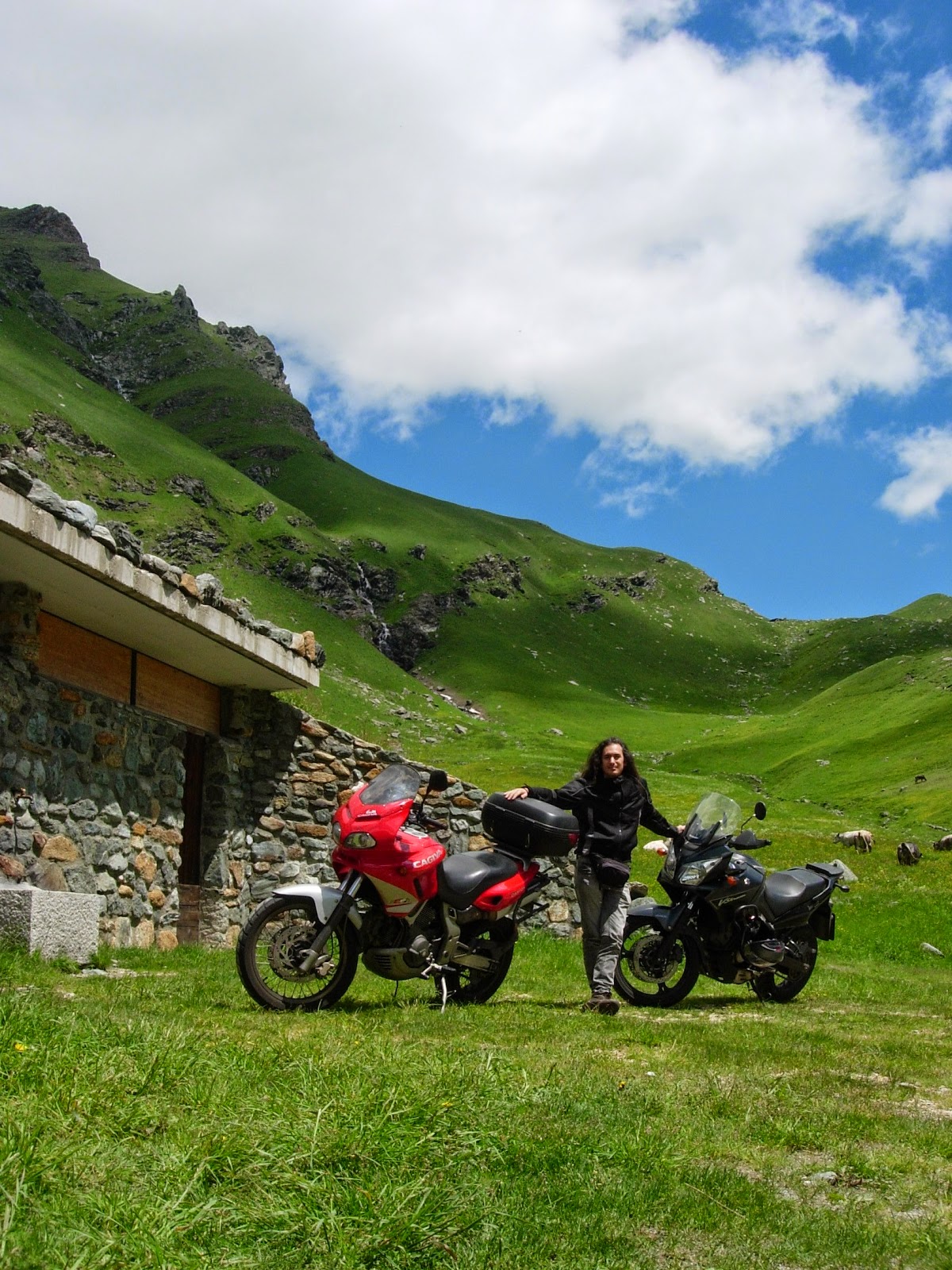 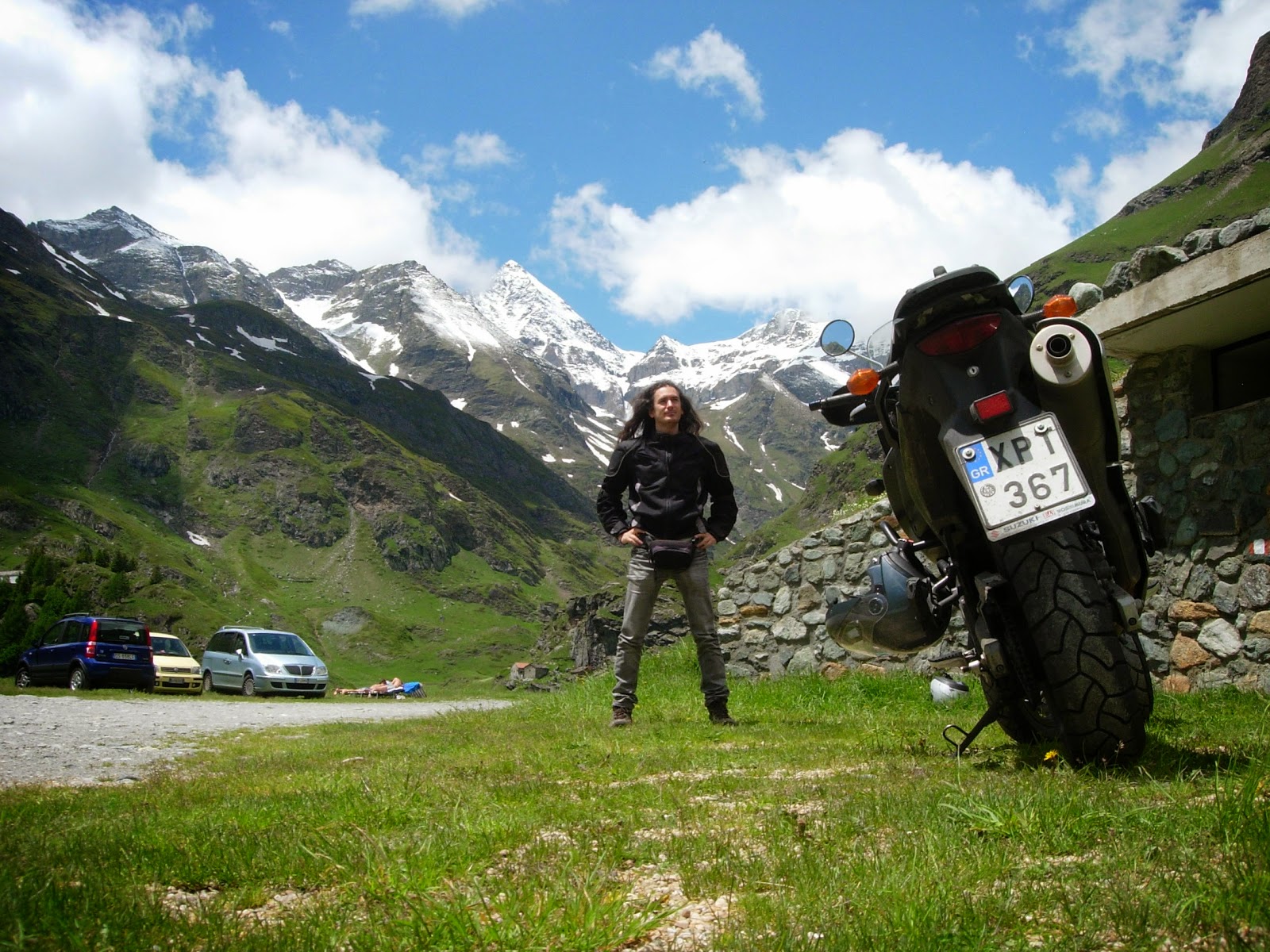 Keep in mind as well that you can return to Torino following another route...just in case you might feel bored enough to do the same route back :).
On the next day I would leave Italy behind in order to head for France with really a lot of nice experiences. The food, the landscape, the routes, the cities of Italy, everything is designed to satisfy all senses and though I speak no Italian I managed to communicate somehow. Italians don't speak English that much but they want to help you in general and this helped me a lot, combined with the fact that for some reason I can understand them somehow when they speak their mother language ☺.
@ 10:15 pm