The calendar reads 5/7/2010, I wake up to pack my things and Luna who was kind enough to host me at Dornbirn sets off to work. We say goodbye and I start preparing my breakfast in no hurry as I waited for the rain to stop (without being sure that it would stop actually). The view of the surrounding mountains full of fog, clouds and rain was not attractive at all for riding. Finally just before noon the weather cleared up a little bit so I decided to start my way East for Innsbruck. 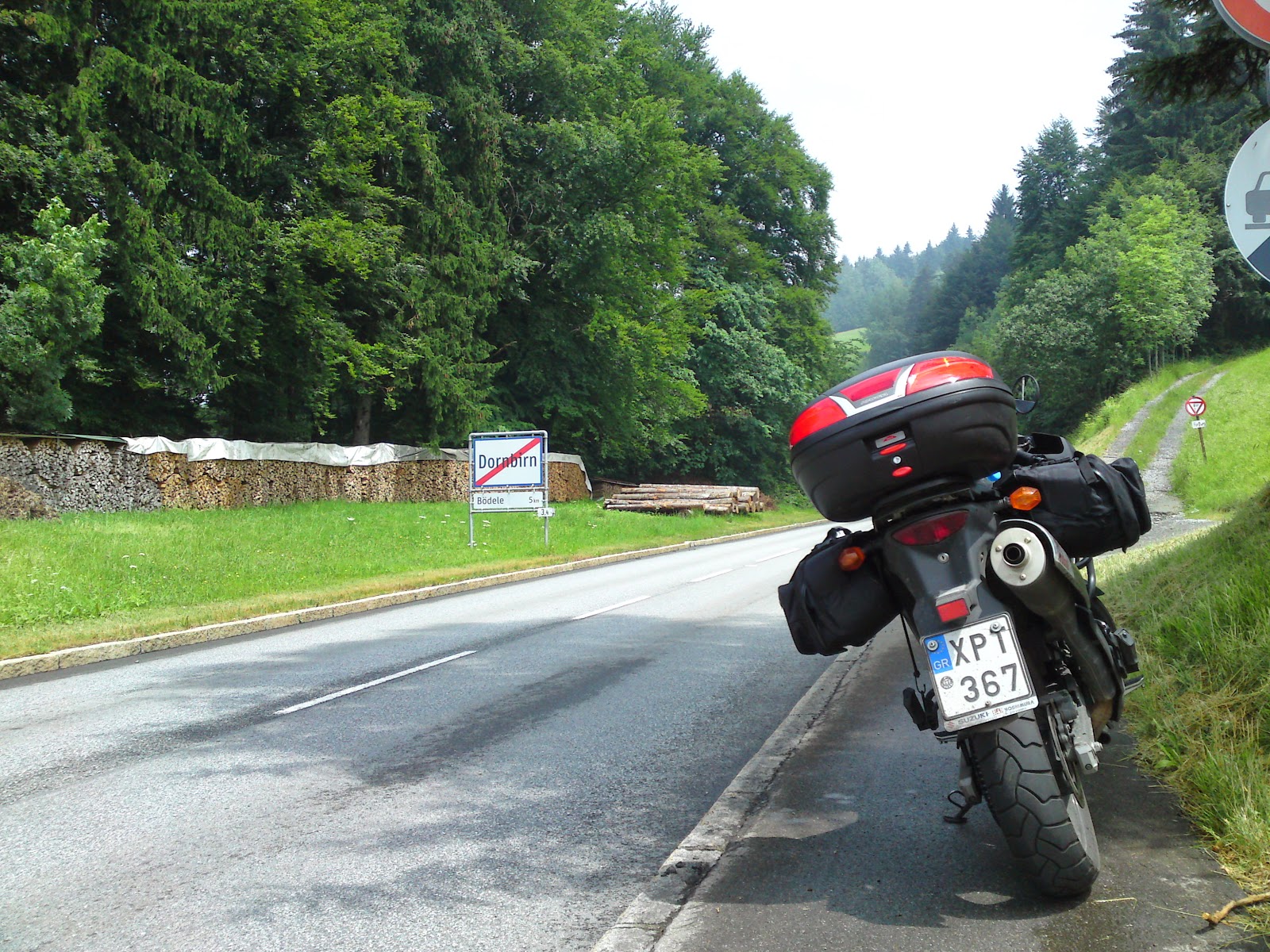 I leave Dornbirn behind on L48 going East and was happy to experience a nice route from the very start with beautiful curves and not too tight bends. The scene is similar on L200 right after but rain came up again as I reached Au. This was the point though were the route became even more interesting with some tunnels on the way providing me short but pleasant breaks from rain. Talking about rain it became even harder later on and didn't allow me to enjoy route as much as I would like. Fortunately things got better when I was close to Otztal – Bahnof where I left B171 for L309. This looks like a circle deviation on the map going to Innsbruck but it worth doing so. 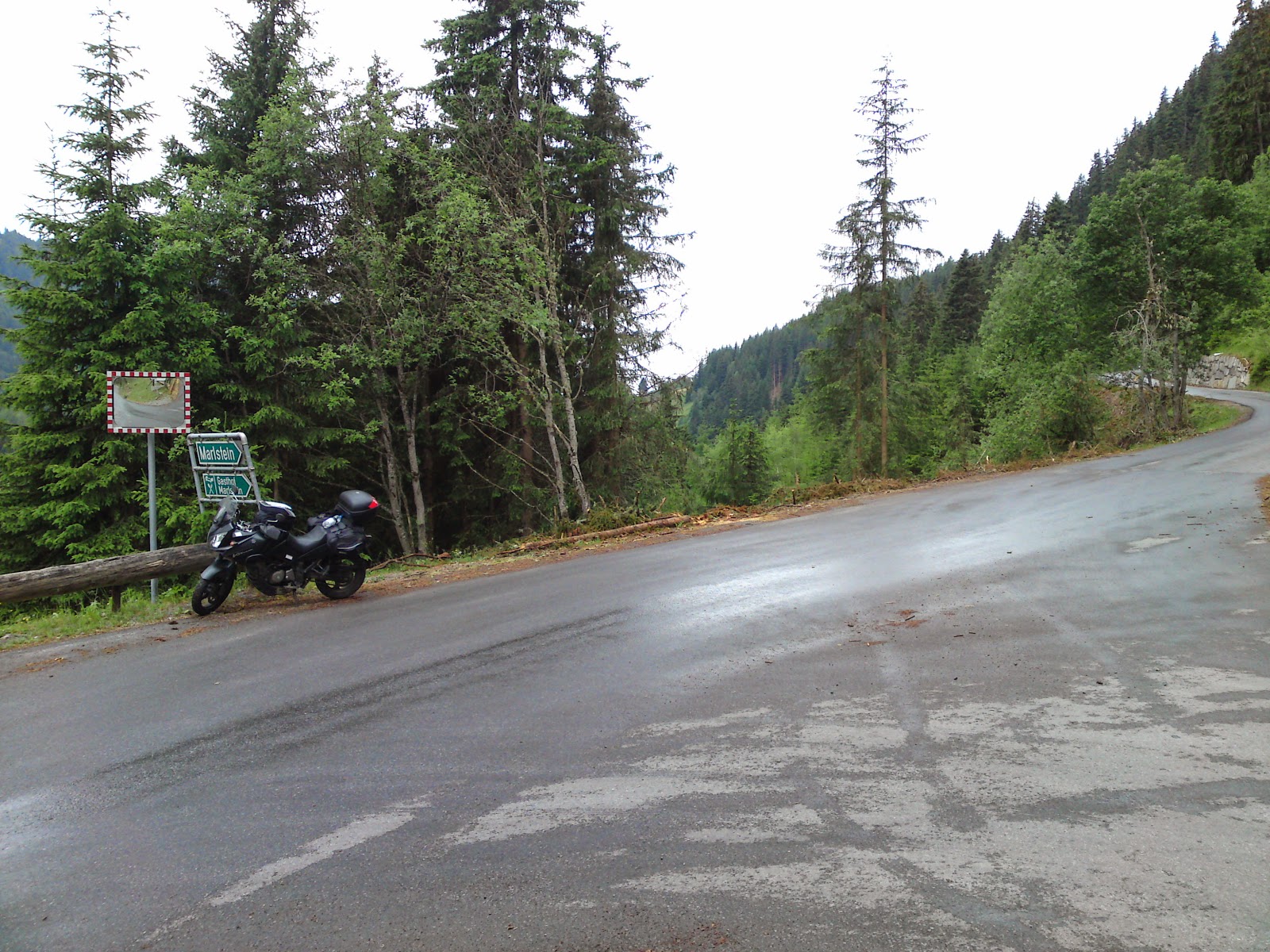 It is just a few km more but it is a very beautiful route with no traffic at all. Lots of tight bends going up the mountain up to Kuhtai which lies at 2020 meters. 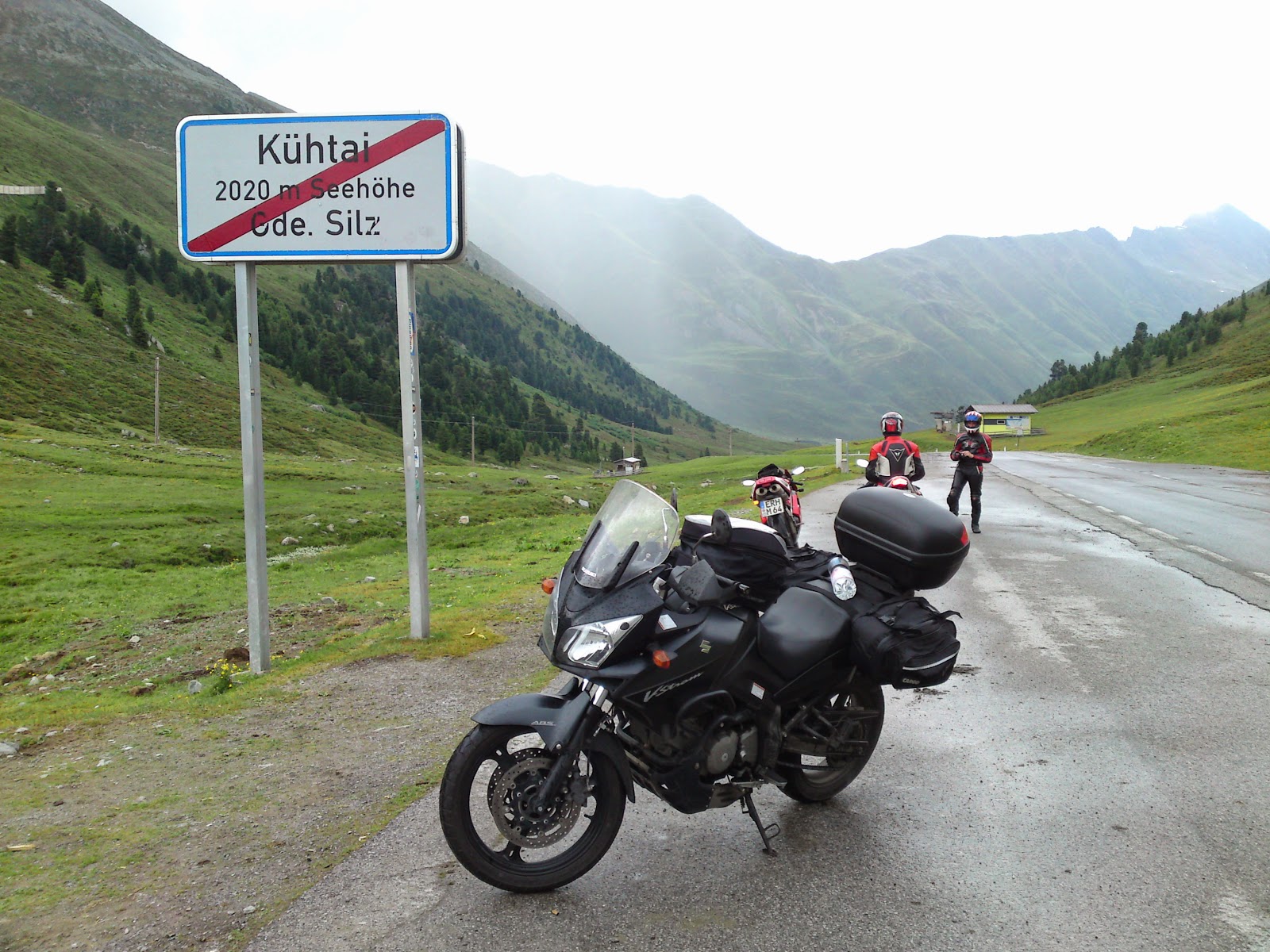 If you are luckier than I was there and it is not rainy you will enjoy the route even more than I did. What was totally indifferent about the rain was a group of cows staying idle on the road obliging me to make a slow slalom between them in order to start my way going down to Innsbruck.
Actually I had to go to Igls which is about 5 km South of Innsbruck. This would be the meeting point with Axel, a very good friend and experienced biker as he works as a tour guide in motorbike adventure trips for long. It is nice to be able to chat with experienced persons but relaxed enough not to show off and Axel is one of them. Additionally,  he hosted me for the few days I was there.
Unfortunately the weather was not the best one during my stay there as it was raining almost all the time and though we wanted to do some riding around we finally did not. We had time to walk around Igls instead and see the beautiful forest that lies there, 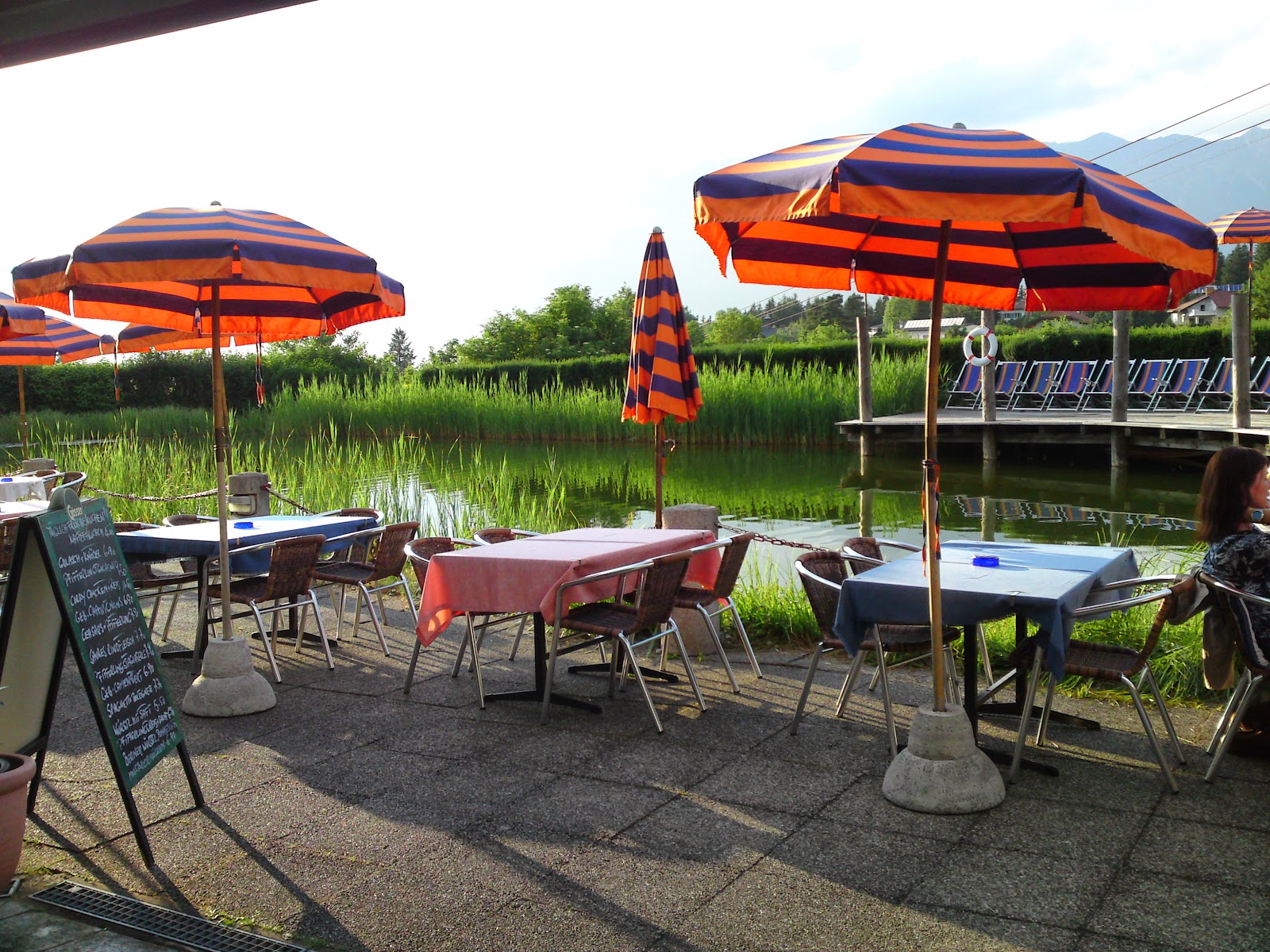 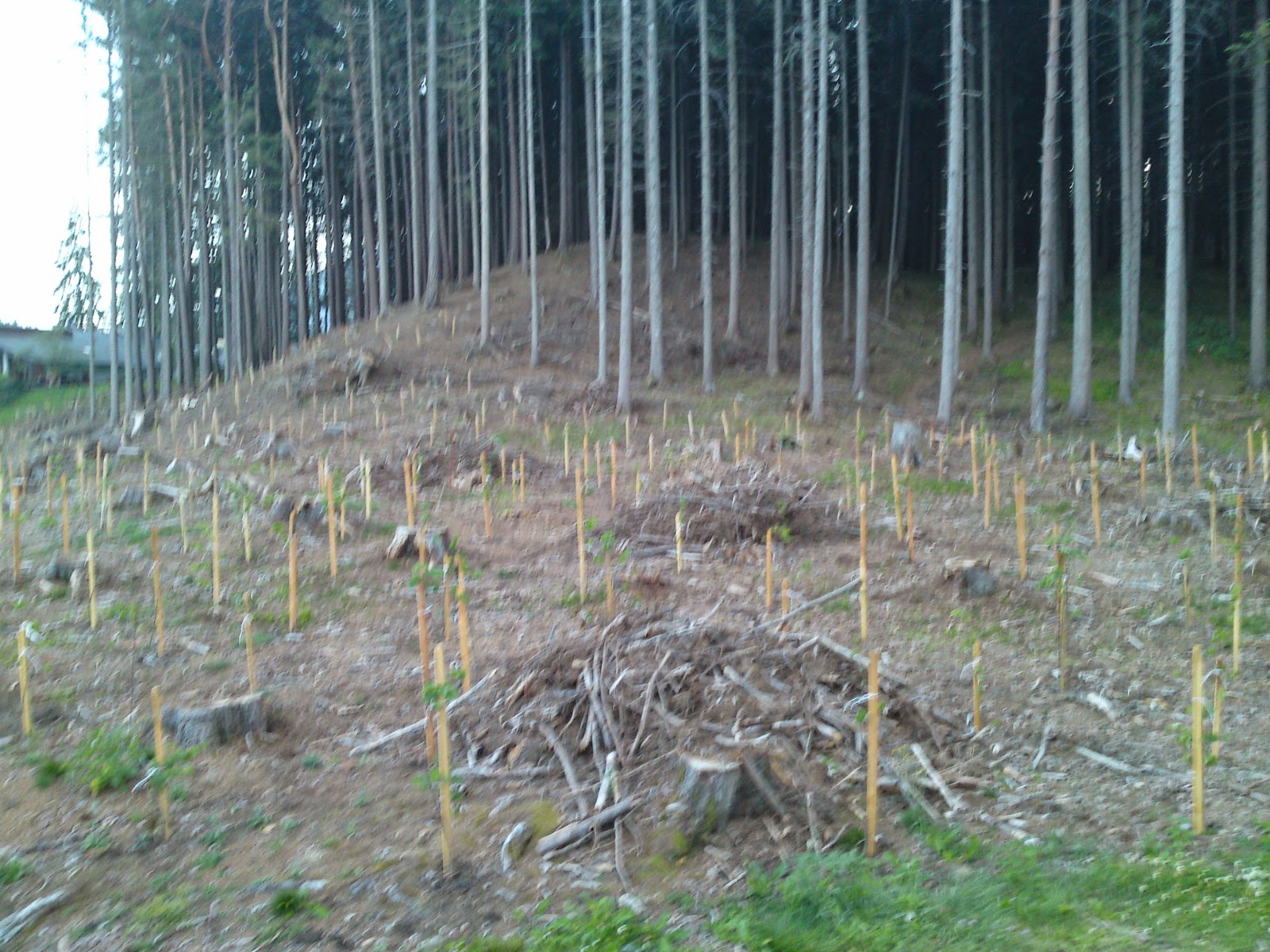 as well as in Innsbruck which is at a great location with Alpine peaks laying all around. 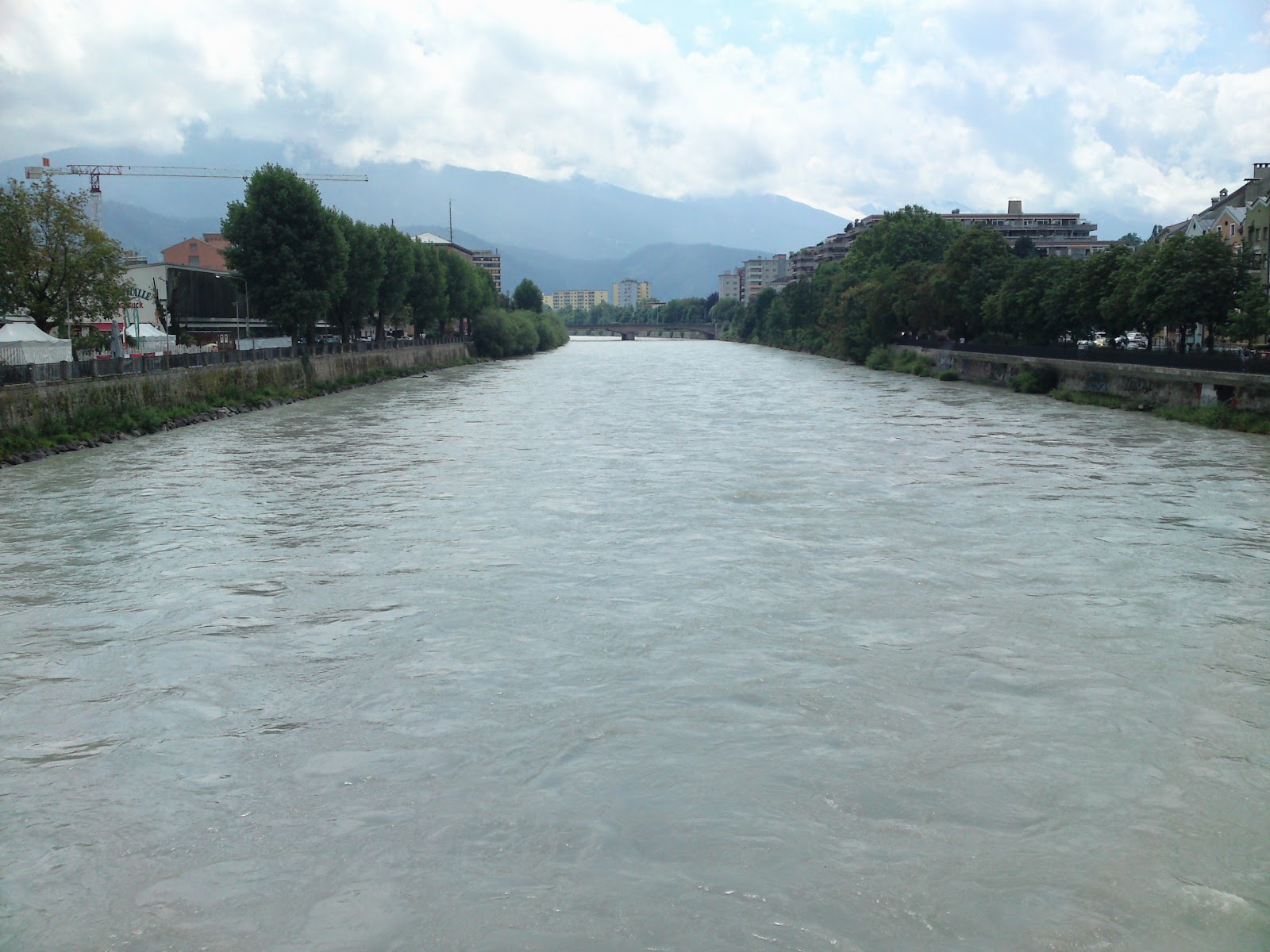 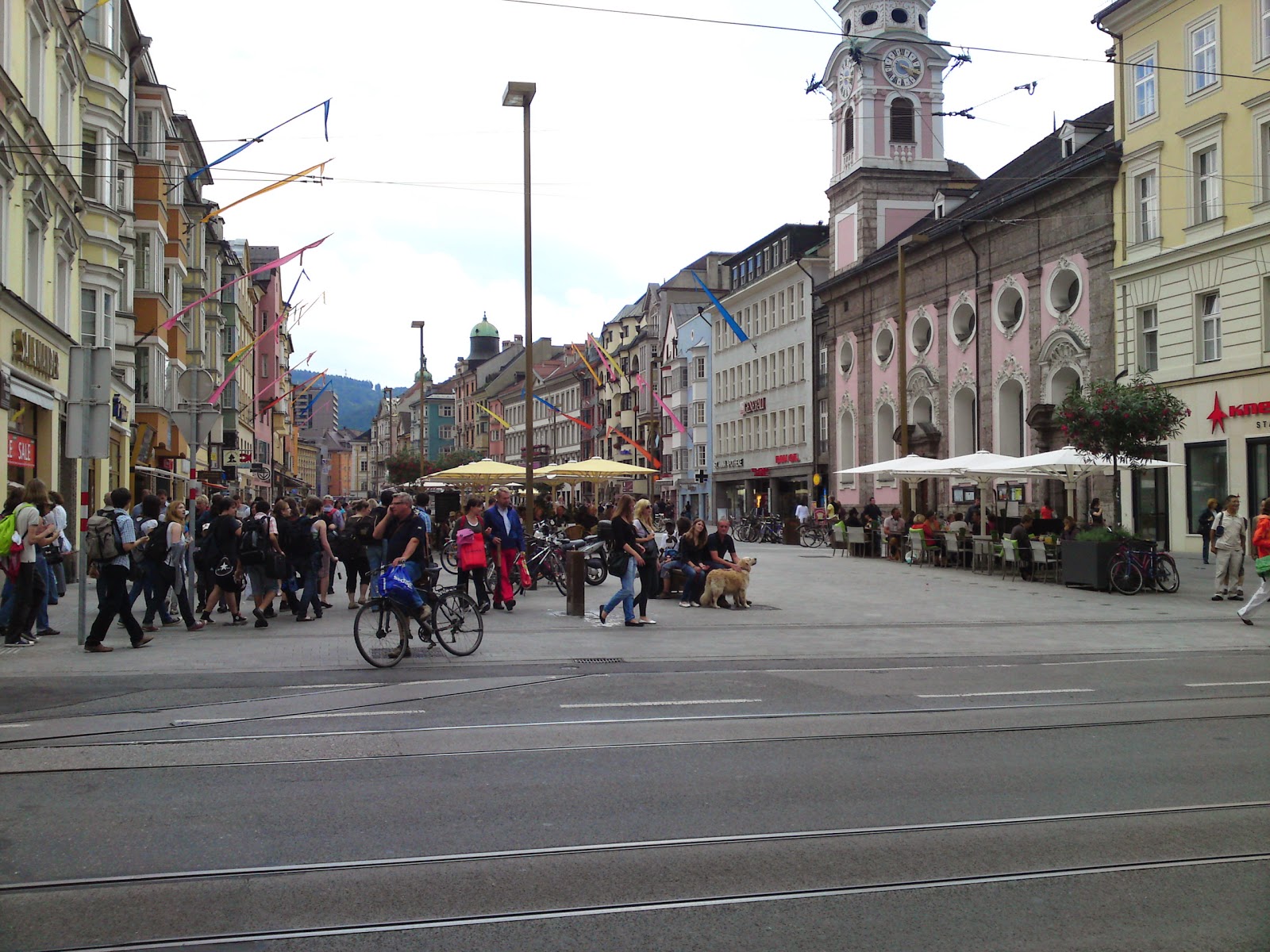 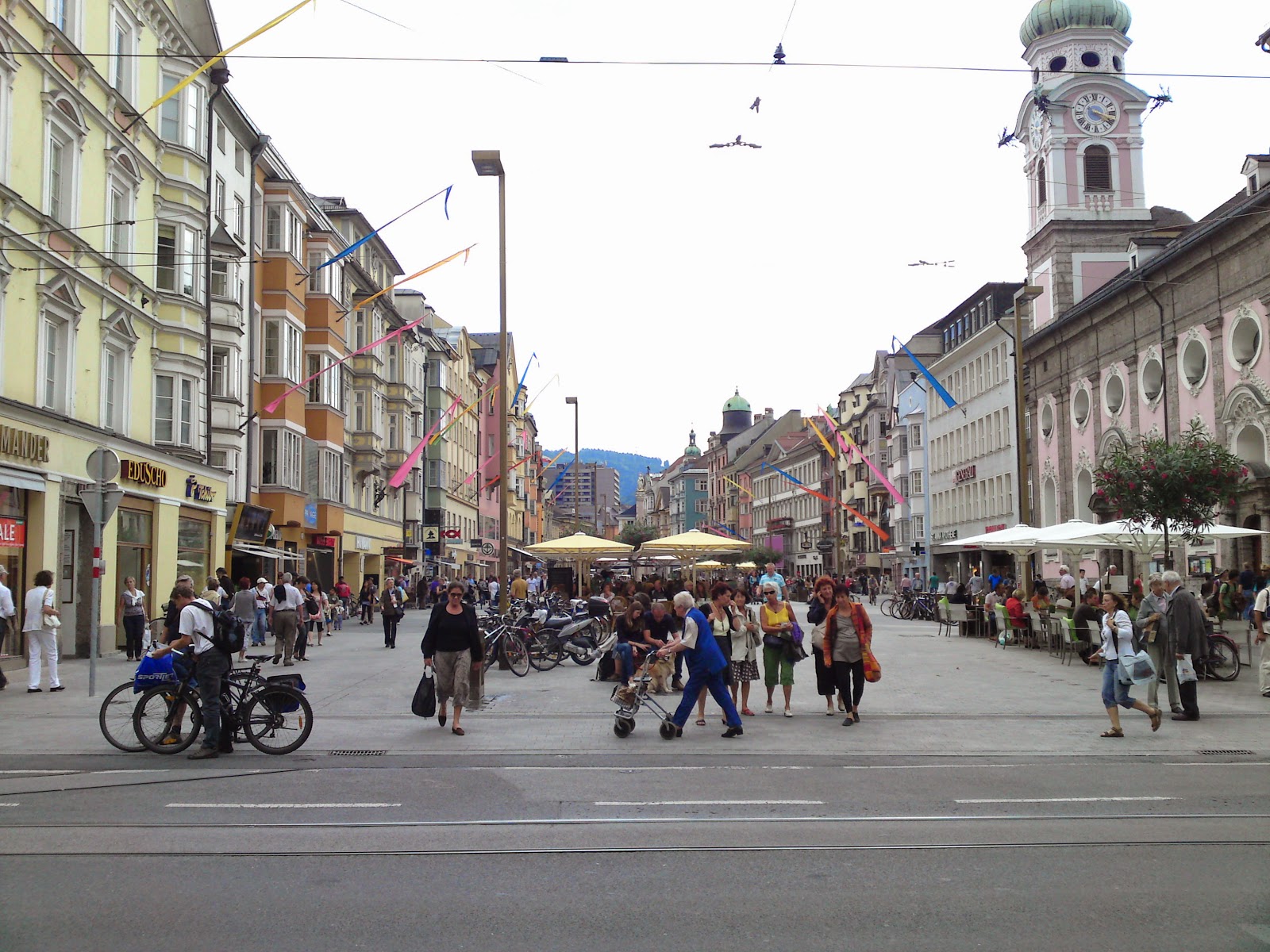 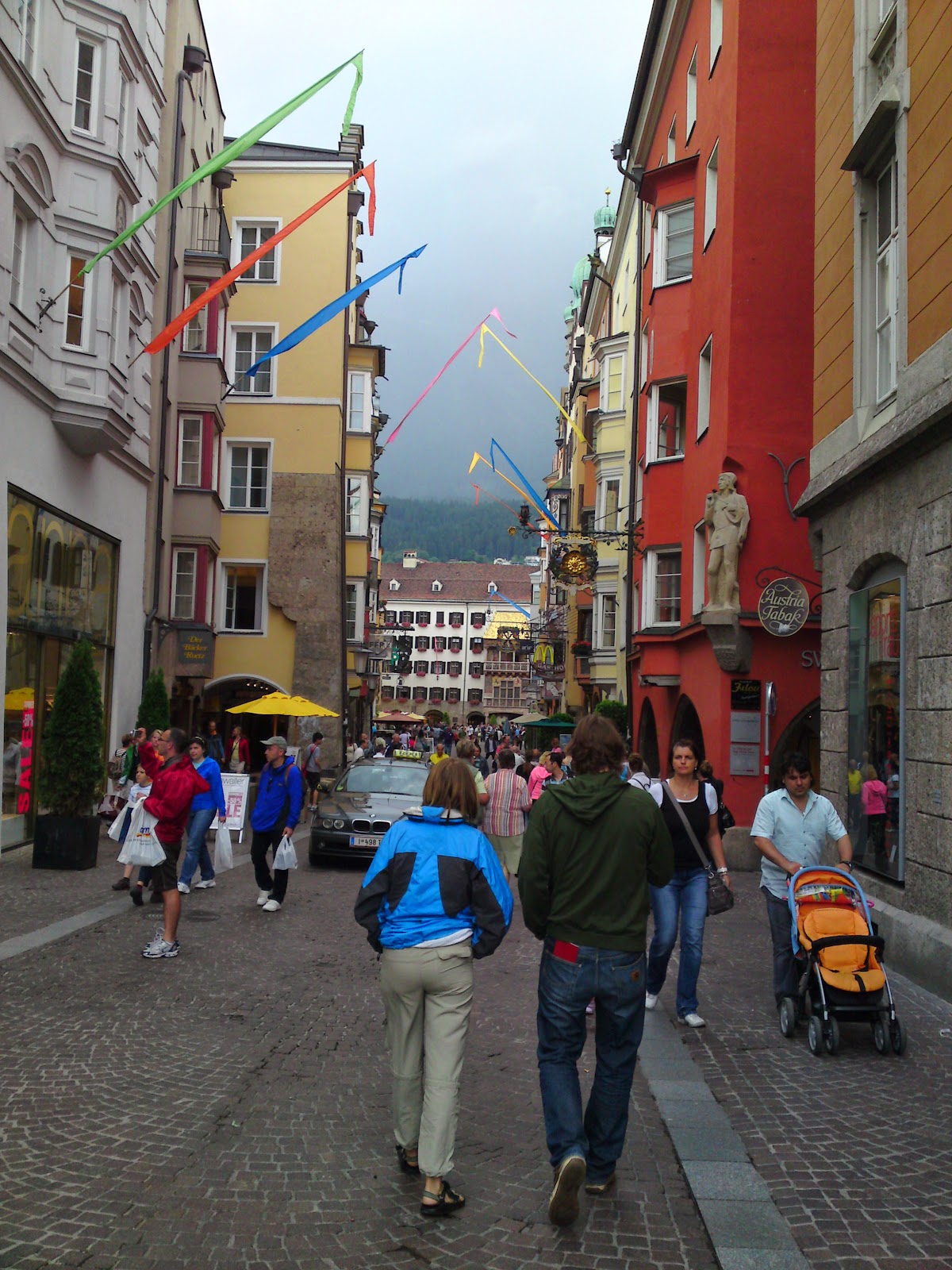 This city deserves to be called “The capital of Alps”. Especially the old part of Innsbruck is just magical. Looks like scene of a history movie. You can also find lots of nice restaurants around, many Italian once as well since the borders with Italy are quite close. This is another advantage of staying at Innsbruck – it is dead easy to go to either Germany or Italy. You just have to drive for a few km North or South.
During the first night at Igls after a very cool restaurant me and Axel visited a nearby bar. As soon as he introduces me to his friends one of them turns at me in fluent Greek “You are Greek right?”. It was the first time in my whole trip that I met someone speaking my mother language and this applied a special feeling. His mother lived in Greece for many years and he has worked in the island of Rhodes for a couple of years as well so he knew the language quite well. He was also very friendly and kind and kept speaking to me in Greek all the time.
The next day Innsbruck was for me the meeting point with my good friends from Australia, Patrick and Belinda Peck. This couple works for a year and travels the next one riding their Super Tenere. You can check this out at their page www.horizonsunlimited.com/tstories/peck . This time they were going from Austria to Switzerland while I was doing exactly the opposite so we had the chance to meet for a few hours at Innsbruck. Unfortunately we didn't spend more time together as we had totally opposite destinations.
On my last night at Austria Axel and Michaela invited me for dinner at home. This is how I said goodbye to the beautiful view from Axel's balcony drinking red wine and later on trying a tasty local recipy that Michaela cooked. 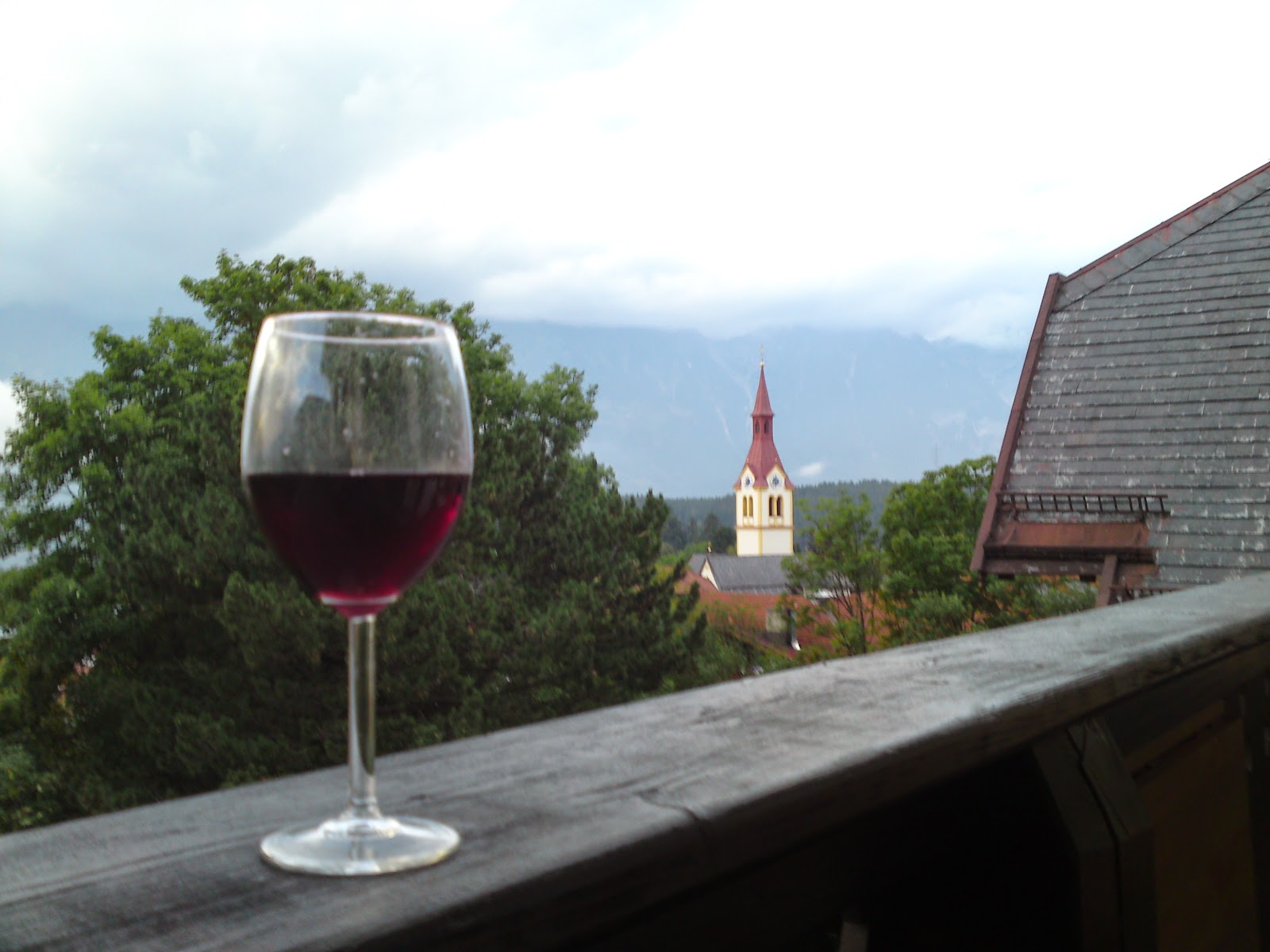 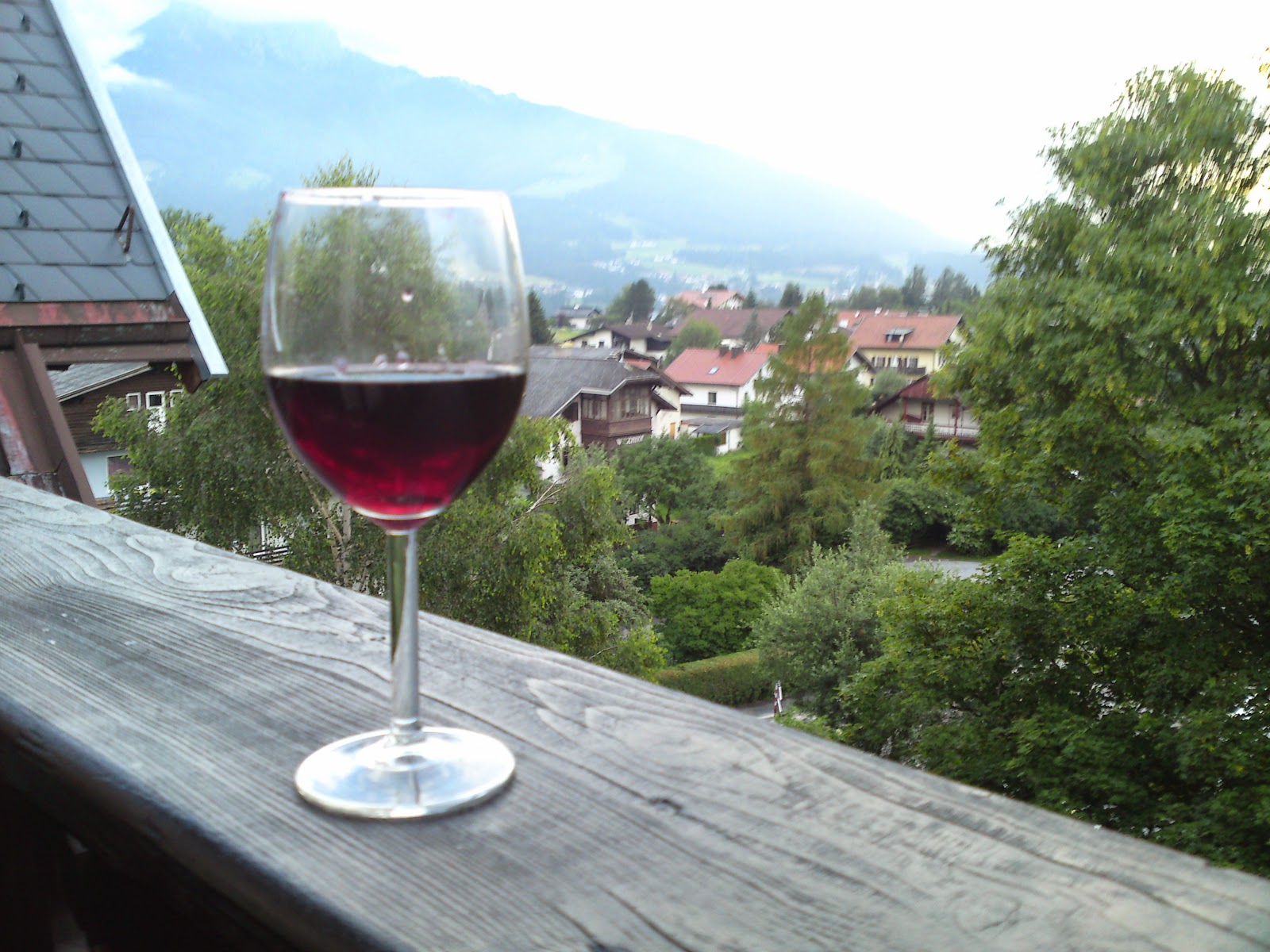 Next morning I woke up with a weird feeling. For the first time after almost one month my trip had a scheduled end. That day I had to ride up to Venice where I had to catch the ferry to return to Patra and then ride back to Athens. Axel offered to keep company with me up to the borders with his bike and so we rode together following some side roads in order to make the route as beautiful as possible, though the whole area there is very nice almost wherever you go. The funny thing was that we met an officer on a police bike who probably had the same idea with us rather than chasing the crime up in the mountains. He also greeted us like bikers do when they meet on the road.
Few km before Brenner we had to split ways with Axel and after thanking him so much for all I continued South to Italy leaving behind the last good friend I made on my trip. The area around the borders is nice but SS244 later on was more interesting with lots of tunnels close to Onies and nice bends after the 22nd km. Things are even better on SP37 which leads you higher on the mountain passing through beautiful villages and SP24 right after takes me to Passo Valparola at 2192 meters on the watershed of the Dolomites. 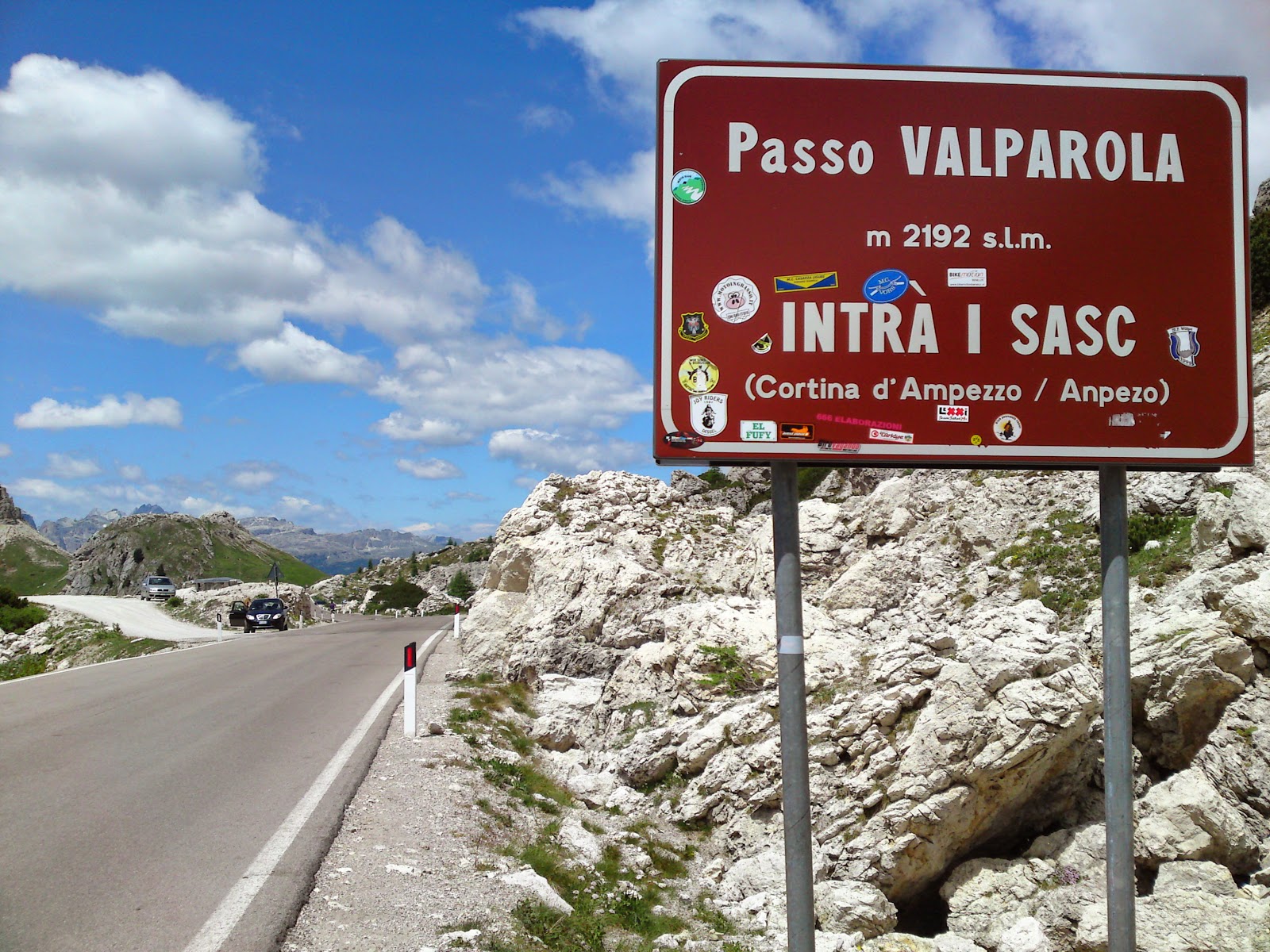 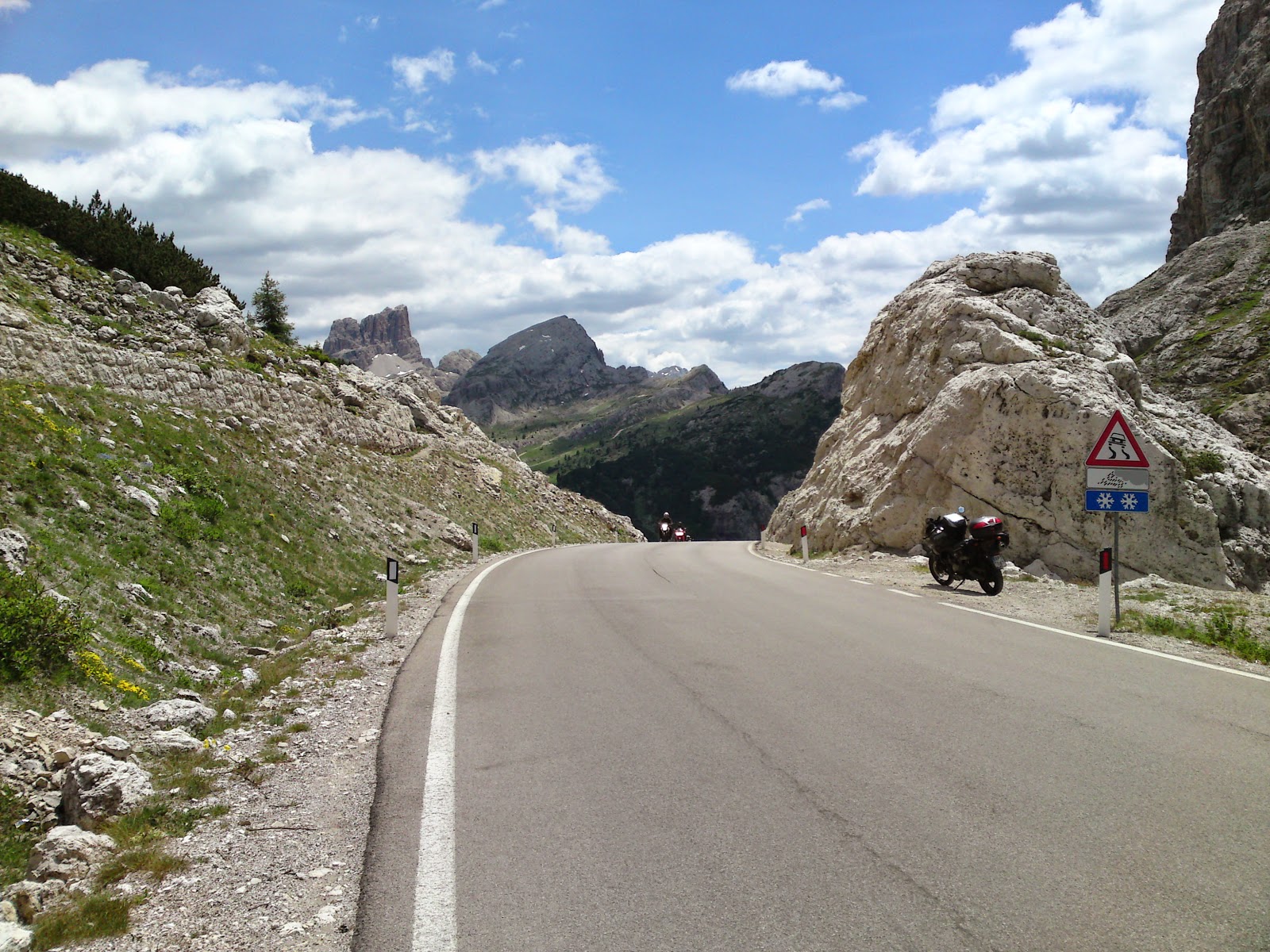 One stop there is not a bad idea at all as well as at Passo Falzarego which lies pretty close a few km later going south.
From there I started descending via SR48, but unfortunately the closer I got to the sea the less scenic the roads became while the traffic was more and more heavy and especially close to the cities sometimes it was unbearable. In other words it was clear that the joy of riding was over and I just had to transport myself. Before Venice I made my way up to Padova for personal reasons since last year I skipped it though I was pretty close. 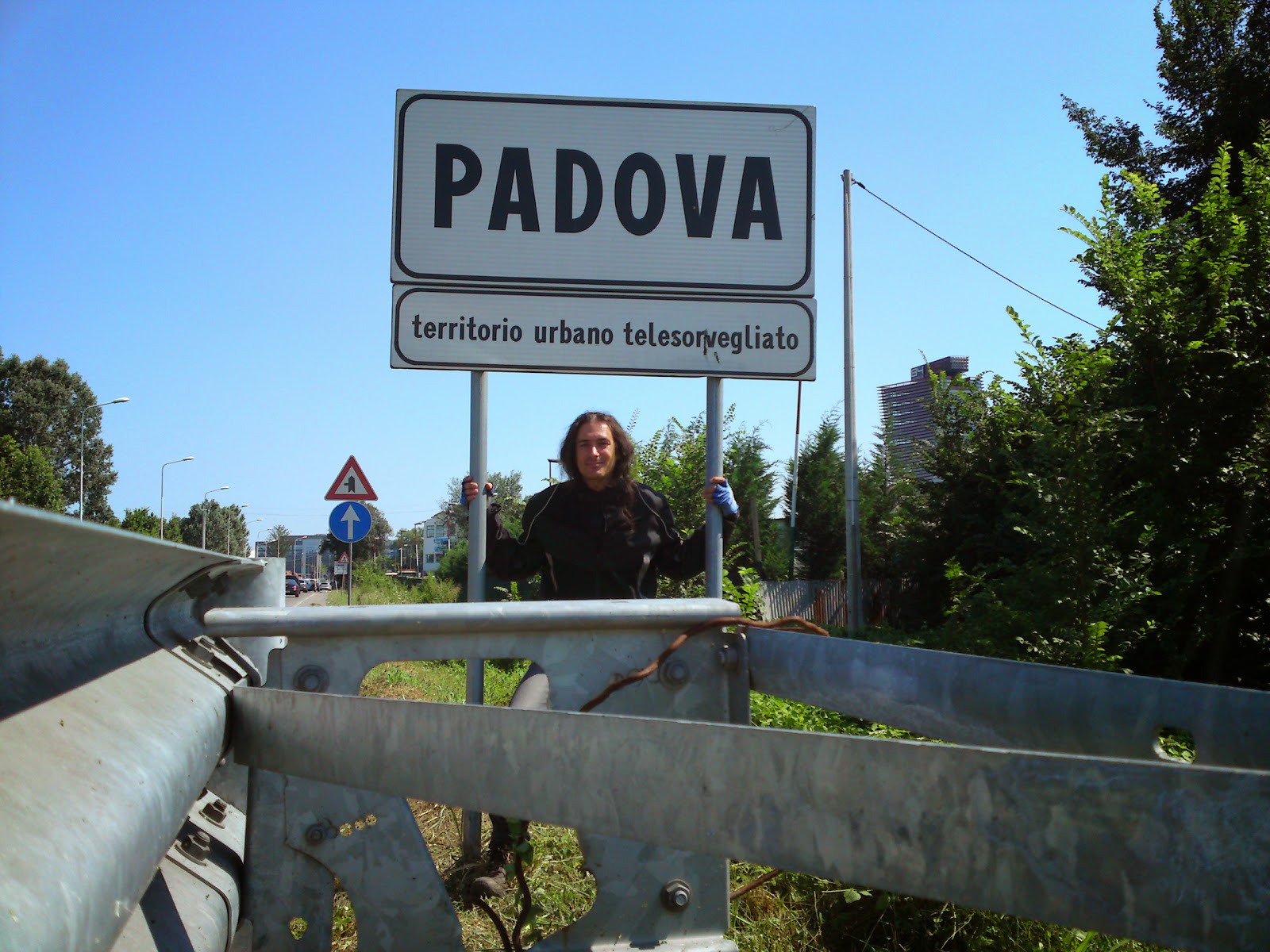 The family of my father has routes (a few centuries ago) from this city. Unfortunately I didn't have much time to see the city cause I had to catch the ferry from Venice but I managed to ride around for a while.
Arriving at the port of Venice later I face a lot of heat. I enter the ferry and it only took a few minutes to decide that for me the ferry line Patra-Venice-Patra is over for good. This year it was ANEK's turn to offer me bad impressions from both the vessel and the service quality. At the same time ticket prices are much more expensive, therefore it is more convenient to go to Italy through Ancona even when you travel North. Considering the fact that ferries are much better and the trip is much shorter it seems like the only way to go.
I go outside at the deck trying to leave the negative impression behind and I start taking pictures since Venice offers countless unique images to capture. 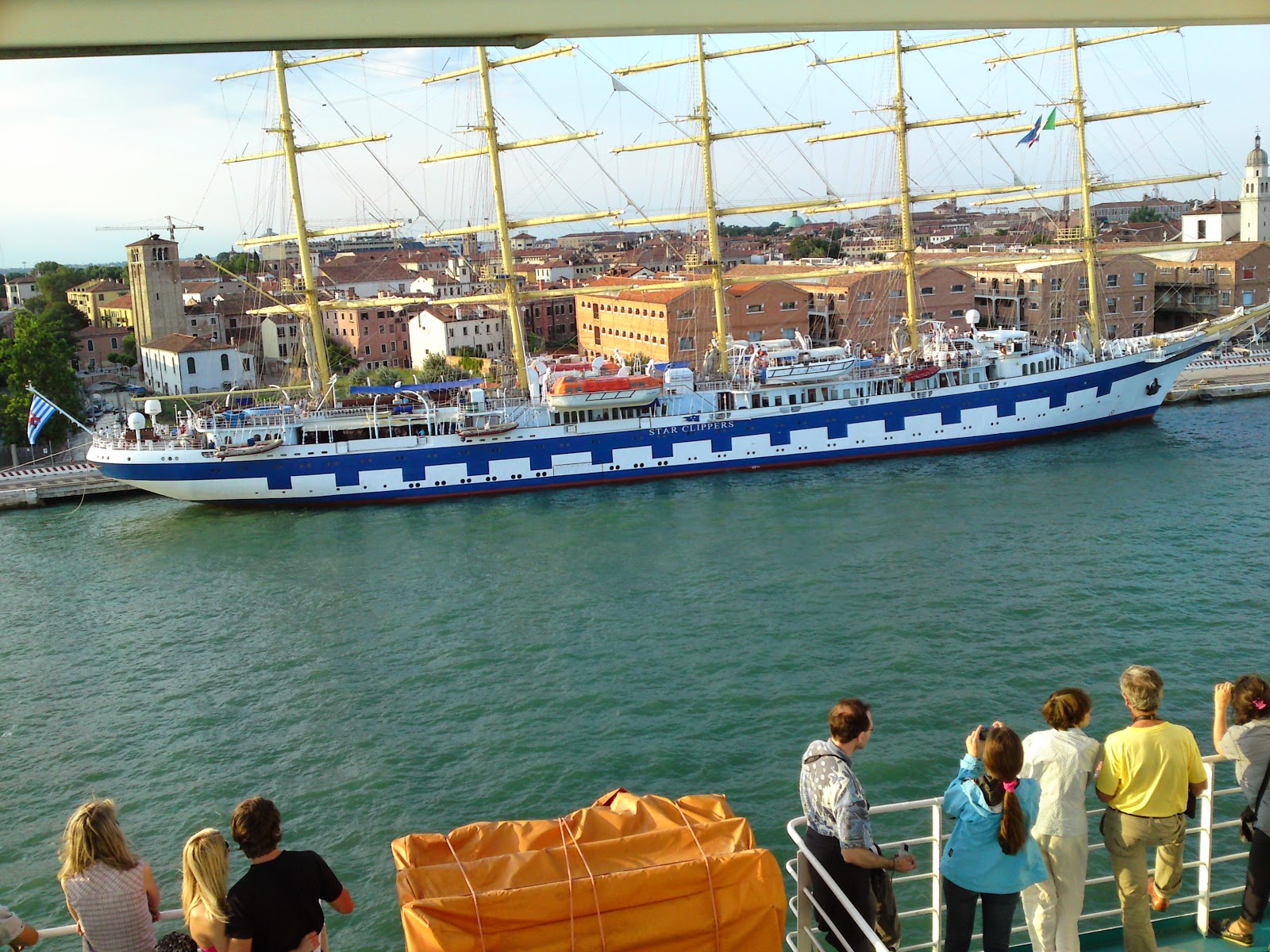 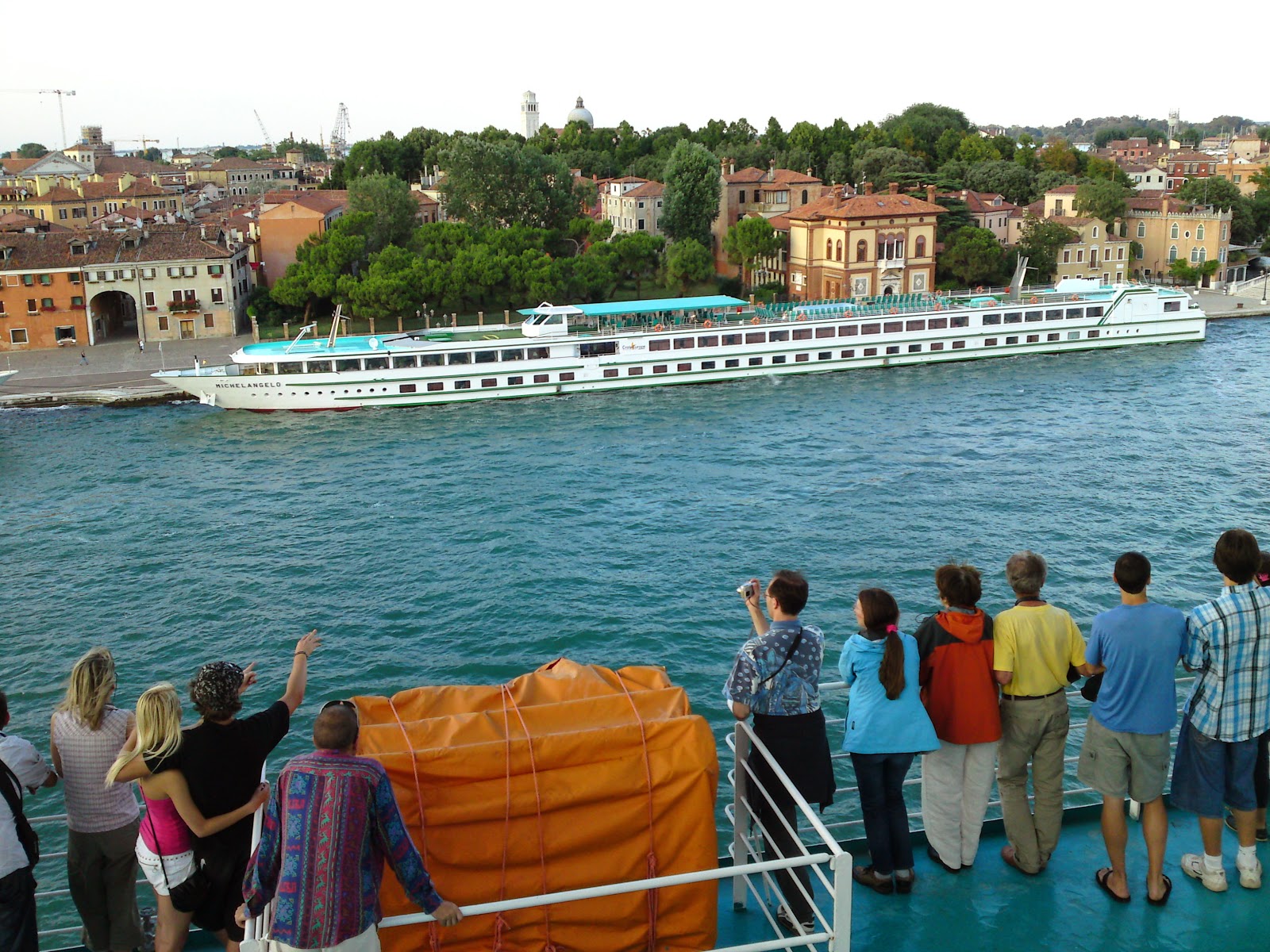 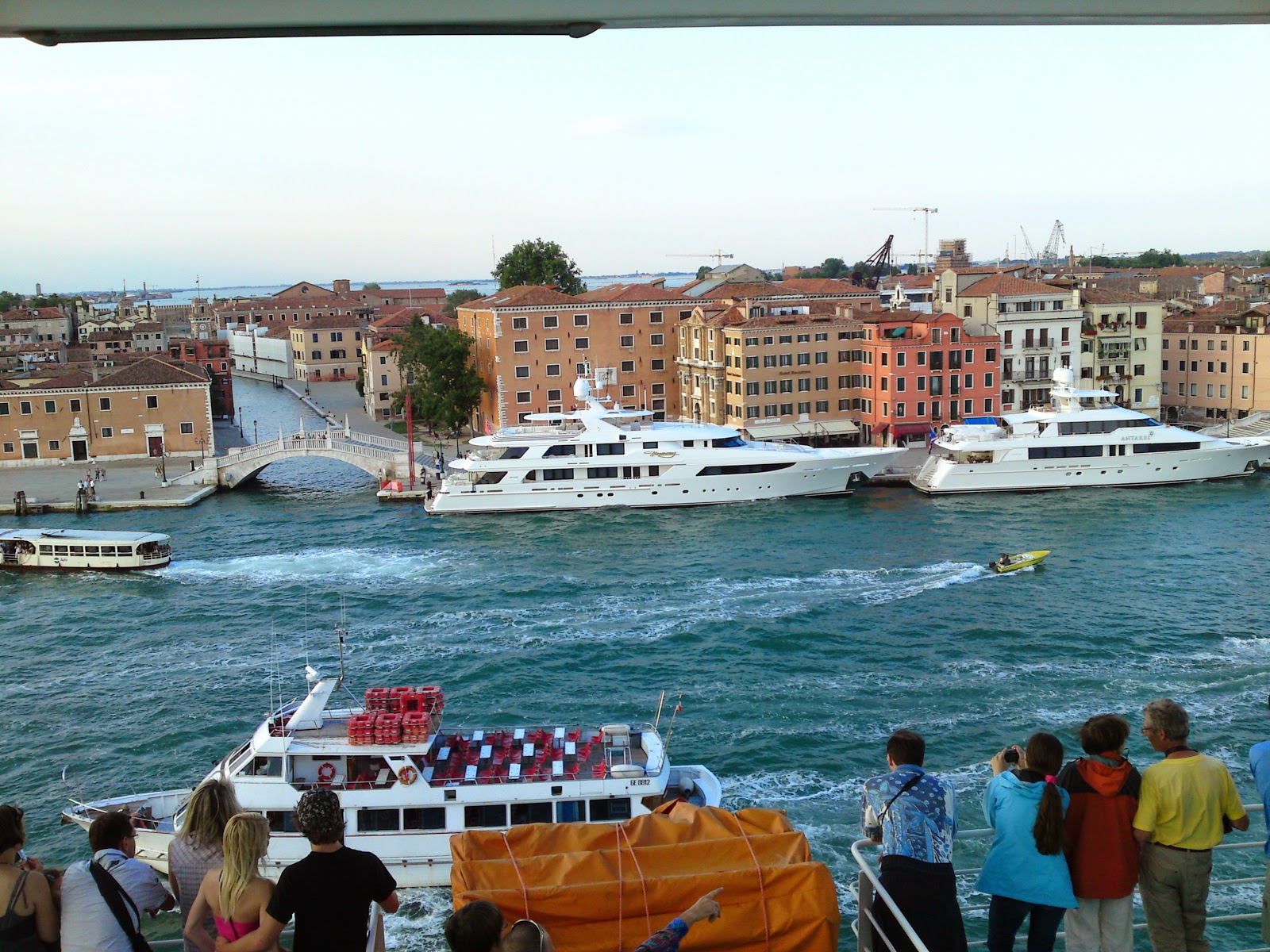 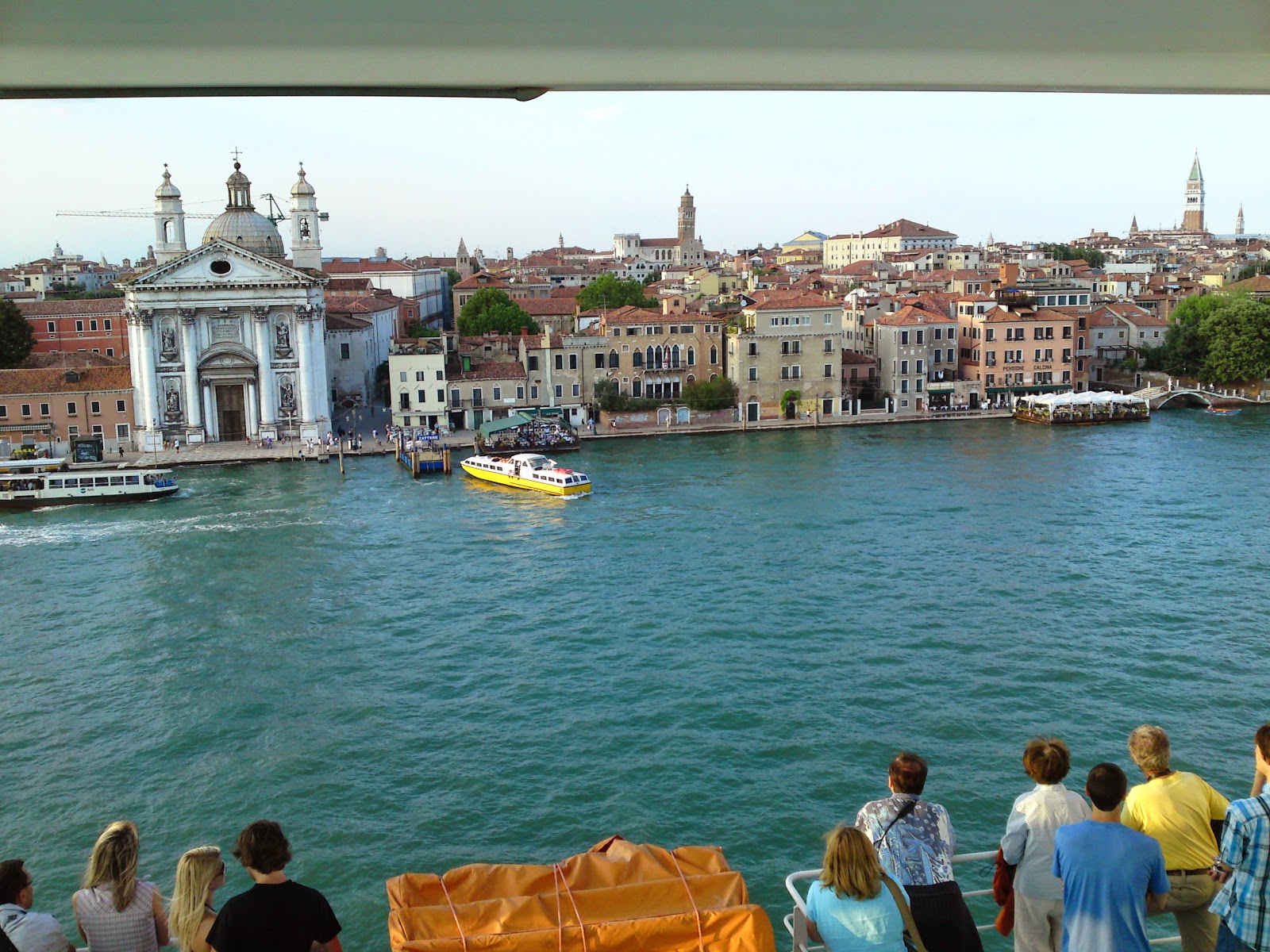 This is more or less how I ended the biggest trip I ever made up to now, after riding for more than 5000 km, passing 17 (at least) Alpine passes, in 5 countries and 3 little states. Regardless the statistics, there is a whole world about it that is left inside you after such an experience that is so hard to describe as it is something totally personal. Sometimes when asked to describe the trip I replied that it was actually a movie. A well directed one with perfect casting. Talking about casting, people I met on the road in other words, I want to say that my trip would never be the same without them. Of course I've been to amazing places that in any case would impress me in a nice way but the people I met around really made the difference and I want to thank every single one from the bottom of my heart, those who are already included in my stories and those who were “behind the cameras” and helped me or chatted with me but it is just impossible to include them all in my text. They all have a special place in my memory and this is what is the most important.
Finally, commenting the title I gave to the whole thing, of course it remained just a joke but I have to say that it did have an affect on me and when I finished the trip it made me feel more human and more close to myself.